May Meeting: longer than usual, spirited, at times contentious, but fun! 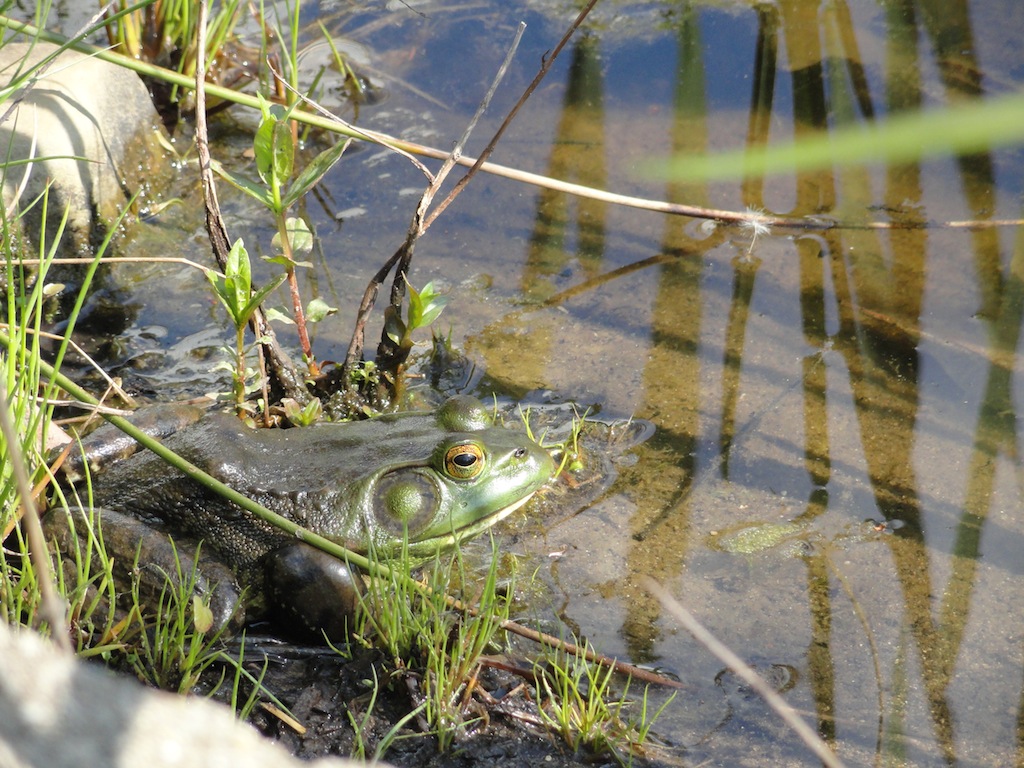 One of the two adult frogs in the GANG pool. I think the female (they’re bigger). This couple has called the GANG pond home for two years now. Polliwogs now swarm . . .

A small coterie of Green Acres residents scooted circled chairs close and proceeded to hammer out our the pre-set agenda items, one by one, until done. The atmosphere was spirited, and, at times, contentious, argumentative, and, amazingly enough, also filled with good will. Somehow we are learning how to air our disagreements without shutting down or hating each other . . .

We greatly missed our friend and neighbor, the late John Gaus, who died about  a month ago, and who would have loved to argue, too.

• Bypass protection: Ann mentioned that Linda Thompson, Senior Environmental Planner for the city of Bloomington, had once told her that when the Bypass widening was done, we should contact her. That the city needs to recreate some sort of barrier for those homes severely affected by the widened Bypass. And yet, as someone at the meeting noted, “Why is no one here from the areas affected? Why should we care, if they don’t?” We also briefly discussed the ideas of possibly applying for a Neighborhood Improvement Grant to construct the barriers, and of reaching out to Bread & Roses, a local permaculture tree farm, for help as well. First step: Ann will contact Linda Thompson and let the group at this meeting know the results.

• Annual Bloomington Neighborhood Celebration, June 1st. Ann, Jim, Doug and Georgia all agreed to help table at this event that brings neighborhood associations together to share ideas and fun. Rather than the traditional “Awards Ceremony,” Vickie Provine of HAND has asked each neighborhood to draw up a “Neighborhood Potluck Idea” to share with other neighborhoods — either an idea that has already become a reality or one that’s in the works. Everybody agreed that the GANG (Green Acres Neighborhood Garden), now entering its fifth growing season, is the obvious choice, for us. Other possibilities included: our visioning process with the city; Jennifer’s new, whole yard garden, GANE (Green Acres Neighborhood Ecovillage), and the Gift Circle.

Ann agreed to write up the GANG garden and submit it as GANA’s contribution.

• Green Acres Neighborhood Ecovillage (GANE): Doug told the story of how GANE got started, two years ago, when he moved into Green Acres across the street from Ann, as a way of further realizing our long term vision/goal of a sustainable neighborhood. So far, it sits shimmering on the internet as mostly virtual reality, but the information on the GANE website draws at least one or two calls a month from people from elsewhere who would like to move to a place that sounds so ideal; plus Doug spoke for an hour with the man who started Enright Village in Cincinnati, likewise working towards retrofitting an existing neighborhood into an ecovillage. A few of us plan to visit Cincinnati soon to learn more about how they are coming along.

That segued into a considerable discussion about ways to encourage more families, retired people, faculty and other working people, graduate students, etc. to move into the neighborhood, so that it wouldn’t be so dominated by undergraduate rentals. Jelene talked about taking pictures of existing houses for rent or purchase, and Georgia said she would talk to her daughter Lucy who lists them for her neighborhood and might be happy to do so for ours. We could then have a list of properties up on our websites (GANA and GANE) for newcomers. (Neighbor Jane did this for GANA for a year or two, homes for purchase, though not to rent. Thank you, Jane!)

And that discussion segued into yet another one, how to build membership in GANA. We thought of a band night (for all the bands that practice in the neighborhood), with food and possibly a fundraiser. Possibly at the Comedy Club, since Georgia knows the owners. But the idea that seemed to stick was  “movie night,” pairing our meetings with movies, like we did with a Speaker Series a few years ago. It would be easy to do in the new space.

• GANG Garden: Jim, the new director of the garden talked about our SPEA interns (three of them at this point), and new projects there. These include:

• Final Item: sketches for painting the utility box at the corner of Bryan and 3rd. This was the contentious part of the meeting, saved for last, since we knew that it would be difficult, given that people have different tastes in art, and, as the monsignor used to thunder from the pulpit when I was a kid, “De Gustibus, Non Disputandum Est” (in taste, there is no dispute).

But of course, there was a dispute. And not just about artistic taste, but about just what should the box convey? What are the ideas behind the box, asked Doug. Well, I said, that’s not how Jim and Georgia went about it. They asked the neighborhood list-serve what people would like to see on the box, and they got lots of responses (hmm. So people don’t like to come to meetings, but they do read the emails and they do respond to this kind of request.). And most of the responses were animals: deer, dogs, coyotes, cats — these were the ones that ended up sketched by the artist that Jim chose, who has done public art before and he likes her style. Some of us at the meeting also liked it, and others did not. Some thought that what should be on the box is the logo, since we already have a logo, and it’s beautiful, and it’s on our teeshirts and banners and website, etc. etc. And please! We need continuity!

Jim kept countering that this is an artistic project, and that he’s holding the space for the artist . . .

We collectively decided to drop the deer, since we’d rather not have deer coming through the neighborhood — they eat our gardens. Likewise, drop the coyote (too scary) and replace with a dog. And maybe add smaller wildlife, like rabbits, chipmunks, and squirrels. And, Al said, butterflies! And, I said, several times, tweak the sketch of the bee so it looks more like a bee, and not a hornet!

But why are we so focused on the animals? Why not the people, and the plants? — several chorused. How about change the position of the hands in the sketch to include a seed, asked Jim. How about adding a tree, like is in our original logo, wailed everybody else. On and on.

And shouldn’t it say “Green Acres Neighborhood,” not just “Green Acres,” as indicated by the sketches? And the tone of the sketches look religious! (rays coming out of a sun . . .).

The breakthrough moment came when we all realized that the entire discussion had been operating with two hidden assumptions: one, held by Jim, that this was an art project, not a sign announcing the neighborhood.

As in this description, from the city gov website:

The Adopt a Box Program is part of the City of Bloomington’s Stop and StART initiative which seeks to enliven the mundane and beautify the basic in accessible locations through a series of public art projects.

Proposals may be submitted by any individual or organization and should include a detailed description of the location of the traffic box, a color rendering of the artwork proposed and information on the artist or artist team who will be creating the artwork. A list of artists or artist teams is available from BEAD upon request. Adopters are responsible for supplies including primer and paint.

And the other, that this painting should be our neighborhood’s sign, and should be the logo.

Aaah! How about separating out the two? How about a Green Acres sign with our logo on it, and the art project on the box? Okay, now we can all get behind it.

We hope to apply for a Small and Simple Grant to cover the costs of this joint project.

Jim will send the sketches back to the artist to to alter and refine. And he’ll get back to this group with the results.

1 comment on “May Meeting: longer than usual, spirited, at times contentious, but fun!”