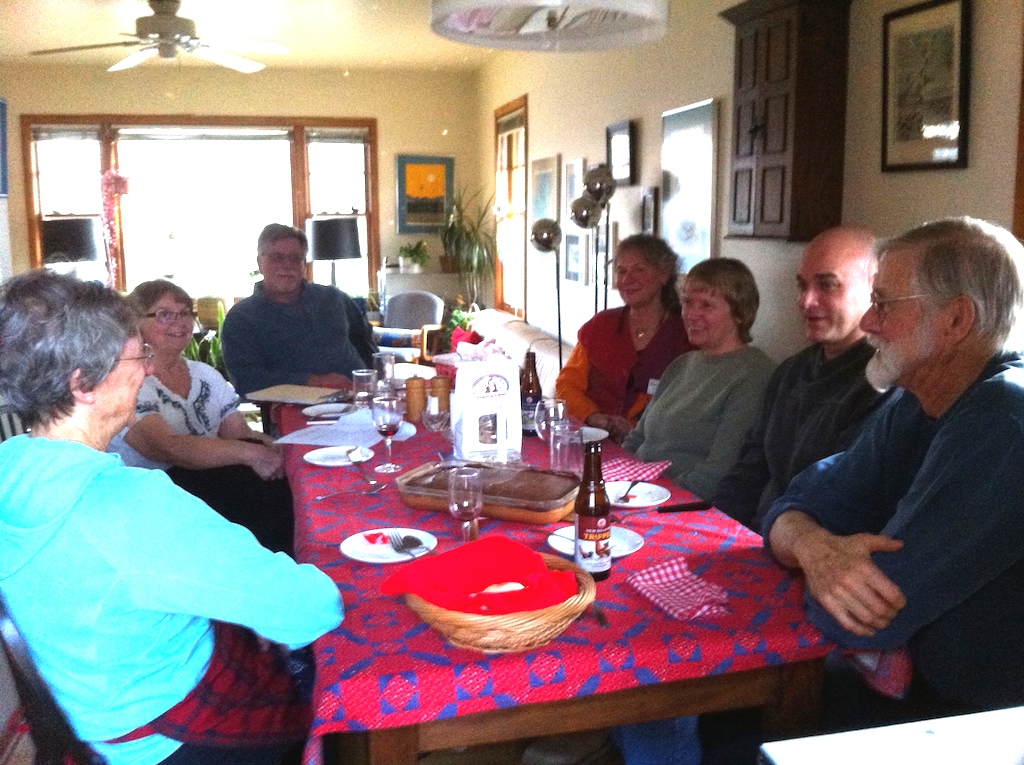 This month we didn’t attract the young ones in the neighborhood. We wonder if the coming midterms had something to do with that. At any rate, the eight of us present at the meeting got right down to work over a very fine meal (lasagna, lots of salads, and three cakes!). We went over our agenda itemsitems quickly, thoroughly, and with lots of spirited dialogue, and then established three committees to move them forward.

• Annual Spring Plant Share: This will be held on the second weekend in May at 2601 DeKist St, with Rebecca as host.

— we decided that for this year we will forge partnerships with one of the near-by churches, First United, on 3rd Street. To this end, we are asking that any Green Acres neighbors who feel moved to do so, volunteer to help with their April workday, the Creative Aging Festival to be held there in May, and with the Winter Shelter, 2014-2015. More on each of these later.

• Help Plant Trees along path between Roosevelt and Bryan: City tree guy Lee Huss will be planting these (sometime this spring?), and could use some neighbors’ help. We’ll let you know when that will happen.

• Green Speakers: We are thinking about asking local people who can share some aspect of what sustainability involves to speak to us at our meetings, perhaps twice a year. (At one point in the past, we had speakers at every one of our monthly meetings. Which year? Can’t remember.)

• Clean-Up for Neighborhood? We’ve done this in the past,  one Saturday morning, about two hours, neighbors walk around designated streets with bags the city provides, and clean up the place. Especially good right after all the parties are over at the end of the semester. . . The more of us do it, the faster, and the more ground we cover. We’ll decide on this at next monthly potluck.

• Newsletter to Home-Owners in Neighborhood: This is a brand-new idea, one instigated by Vickie Provine at HAND. Two other neighborhoods are already doing it. This is to get a list of all the home owners in the neighborhood, and send them via snail mail twice-yearly newsletters, to let them know what is going on in the neighborhood and, hopefully, eliciting their partnership and cooperation. We have the list, but there are holes in it that need to be filled. We established a committee to sit down and complete this list: Ann, Georgia and Richard. Hopefully, printing and postage will be provided through a Small and Simple Grant from the city. Georgia will write the grant.

• Include Current Listing of Homes for Sale in Green Acres on websites, both GANA (Green Acres Neighborhood Association) and GANE (Green Acres Neighborhood Ecovillage) with the intention of attracting more people to the neighborhood who choose to live in the homes they purchase: especially young families! While this, and other core neighborhoods in this university town, will always be a place where there are lots of IU students, we would like to see Green Acres stabilize itself enough so that we can not be subject to, but welcome student energies. Neighbor Jane Spearman used to do this for us. Now Richard Evans, a new GANA member, has agreed to take up the task.

• Heal the Edges Project: The other half of our meeting was taken up by what I’m calling the Heal the Edges project, needed as a result of trees being taken down both on the east side (the Bypass project) and the north side (Duke’s new “alley”). We realize that, at least in part, these so far destructive (to the neighborhood) projects could present opportunities to further manifest elements of our Green Acres Neighborhood Plan as filed with the city. (see: https://bloomington.in.gov/media/media/application/pdf/52.pdf). There we visioned paths along all sides of our neighborhood. We are surprised to recognize that this has been accomplished (including the new sidewalk from Overhill to Sahara Mart on 3rd), without our lifting a finger! Now we need to figure out how to make these newly opened areas work for us rather than against us. The people along the north side (about six homes, I think) feel less safe, and are also bothered by the lights at IU’s new tech building, as well as the noise of the bypass. The people along the bypass (six homes directly affect on the part of Eastgate that parallels the bypass) and the six or seven homes near the new underpass at the end of 7th street) are all directly affected by bypass noise. We have lots of ideas about how to work with these areas to help neighbors along the edges be less affected by the changes, and will be working with both the city and with Dave Rollo, one of our two city council reps, to get these areas well served.

We established two committees to work with the edges:

Along north side: Rebecca, Jelene, and Rowan

Along east side: Richard, Georgia, Al and Kathy

All three of our committes agreed to meet at least once prior to our next rotating potluck meeting, which will be held on Sunday, April 13th, at 2601 DeKist.

I met with Dave Rollo on the day after our meeting and reported on the ideas we have for the Edge Project. He’s going to look into some of the issues that might come up with the city, INDOT and Duke and get back to me in about a week. He wants to walk the north and edges together with us sometime soon.

We welcome your input, and especially your participation in our potlucks, events, and committees!

P.S. If anyone wants to know details about our ideas, so far, about the Heal the Edges project, please contact me and I will fill you in. We have a lot of ideas some of them more plausible and practical than others. Basically, we want to create new barriers along north side and Eastgate parallel to bypass. And we want to create a park-like inviting atmosphere at the Underpass, including  benches, a neighborhood sign, plantings, a mural project underneath the underpass, and so on.

I also asked Dave if it would be at all possible to change the speed limit on the bypass between 3rd and 10th to 35 from 45, since that decrease would reduce the noise considerably and he will look into that. He’s not sure whether it falls under Bloomington’s “home rule” or not.