February 27: Seeds galore, safely in their little soil blocks, spring up with water and sun!

Our two work parties this week were very productive. Here are pics from both Tuesday and Friday mornings, followed by a final one today, during Daniel’s spray time; finally, pics of the notes taken of what was planted when since we began, February 1..

When I walked into the greenhouse on Friday, it was still chilly. Somebody had forgotten to fire up the stove hours earlier. Oh well!

And, when I walked in, a conversation was going as to how we could productively use the ash from the stove (on left). Somebody looked it up and discovered that a thin layer of wood ash can be sprinkled under seedlings when planted to deter soft-bodied critters. Don’t know the url, but  here’s one source for something like that idea. 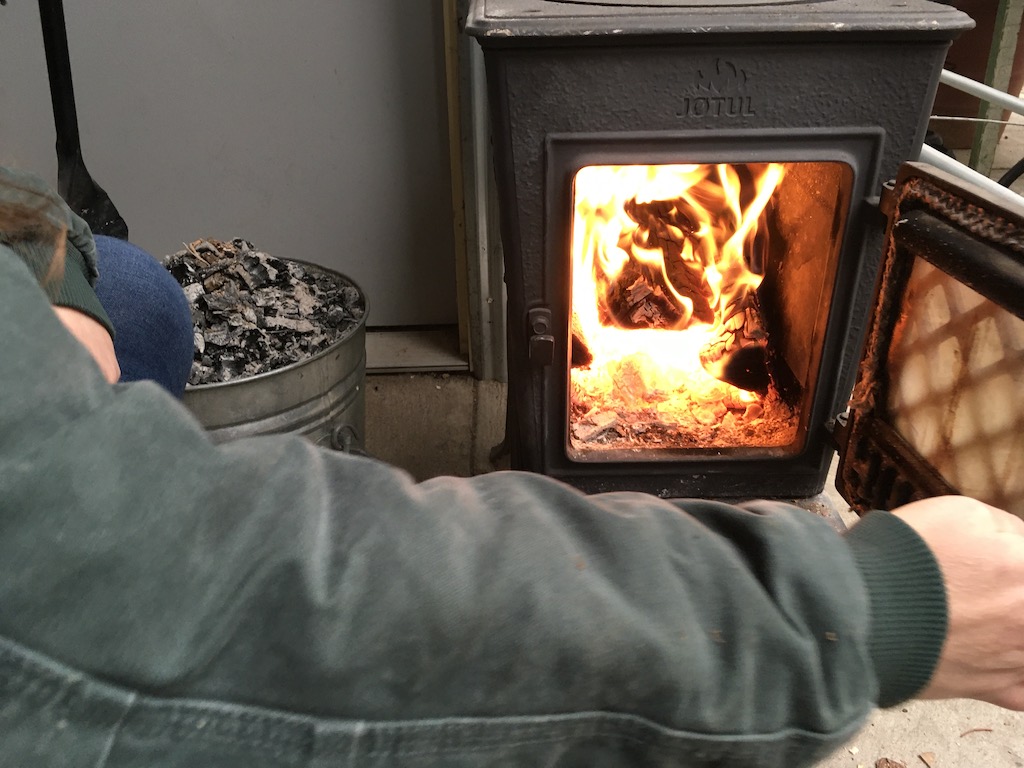 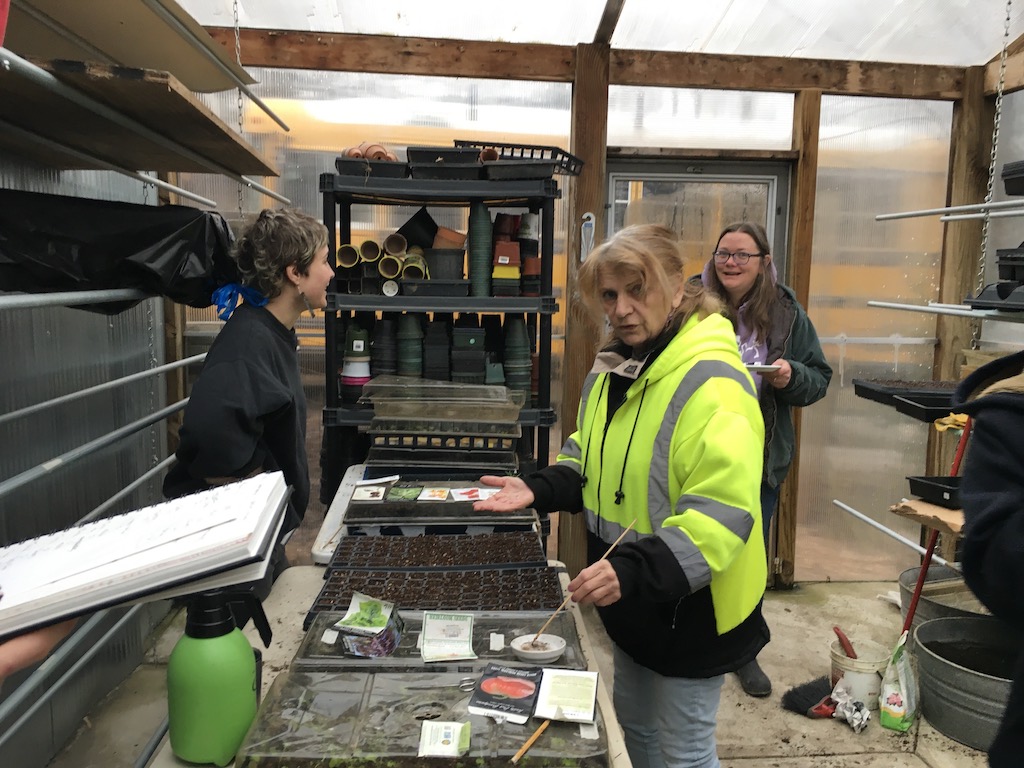 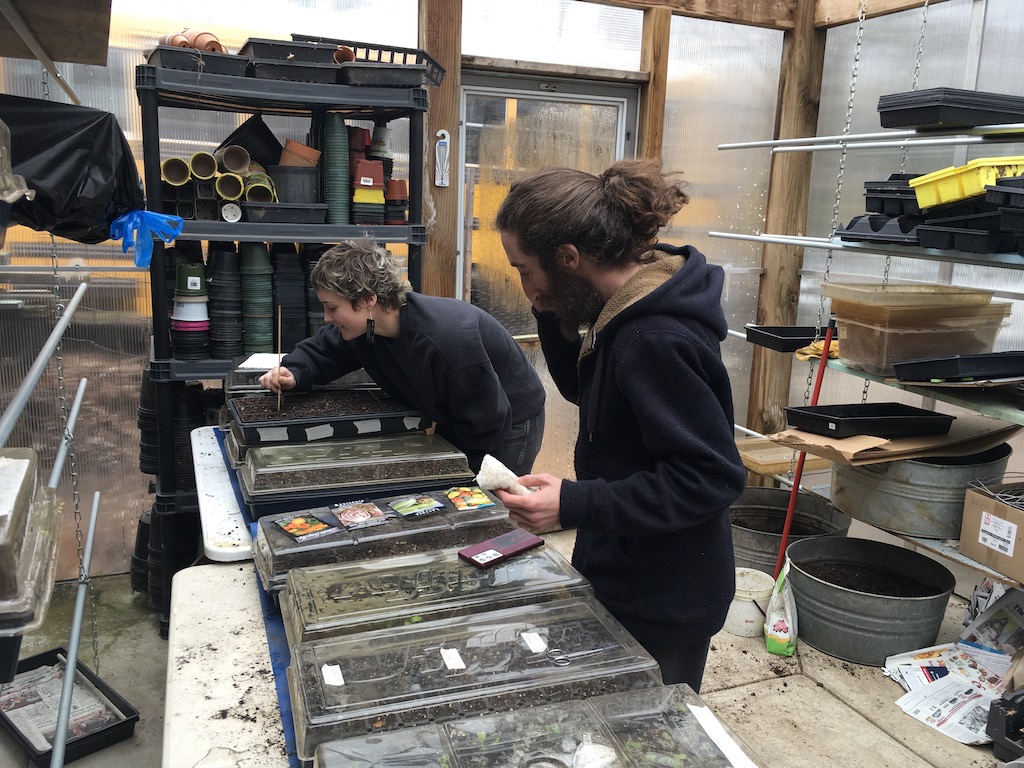 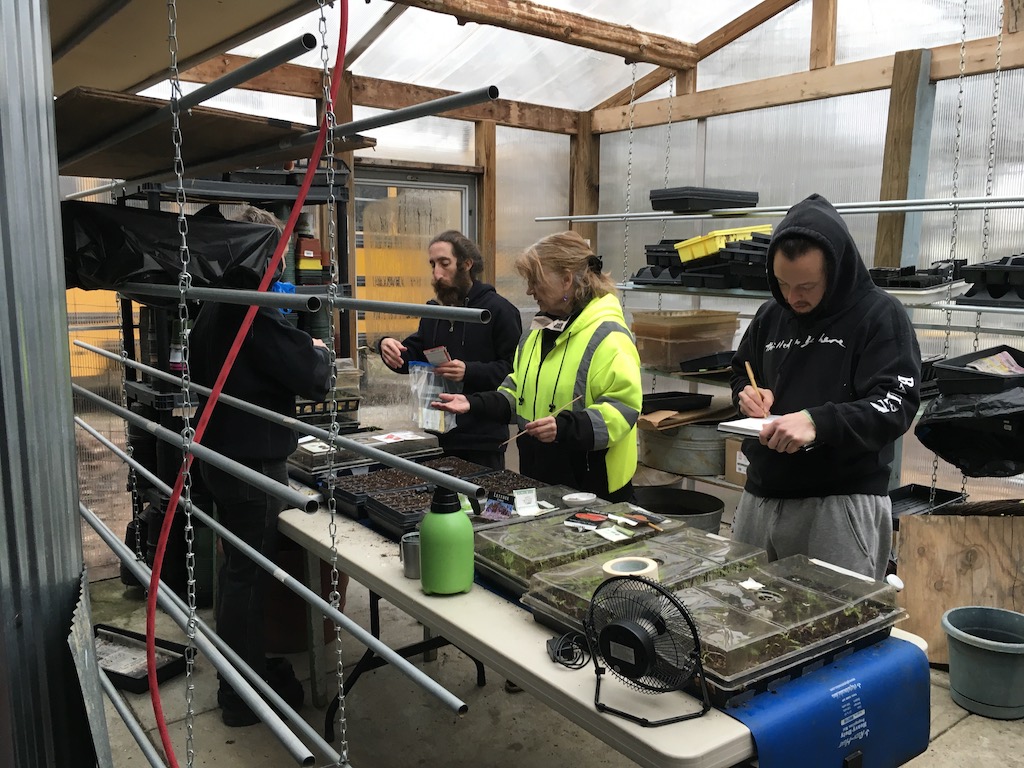 Daniel sprays. Joseph, hidden, waits. He has decided to play the tiny singing bowl, here in his hands, over the plants . . . 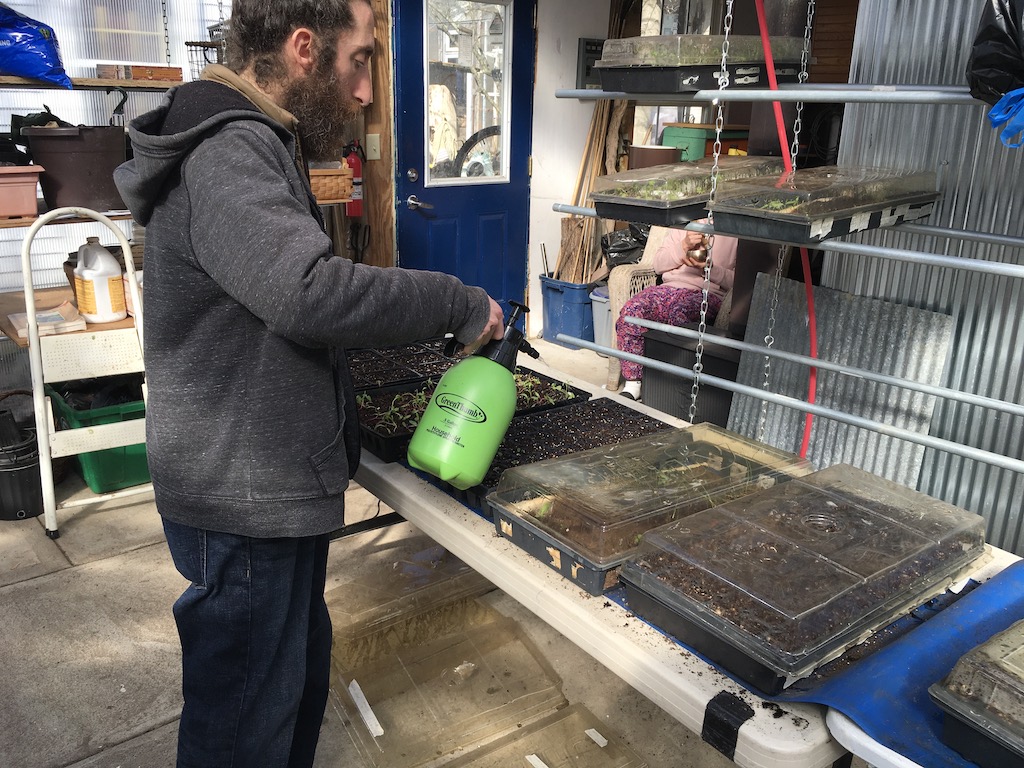 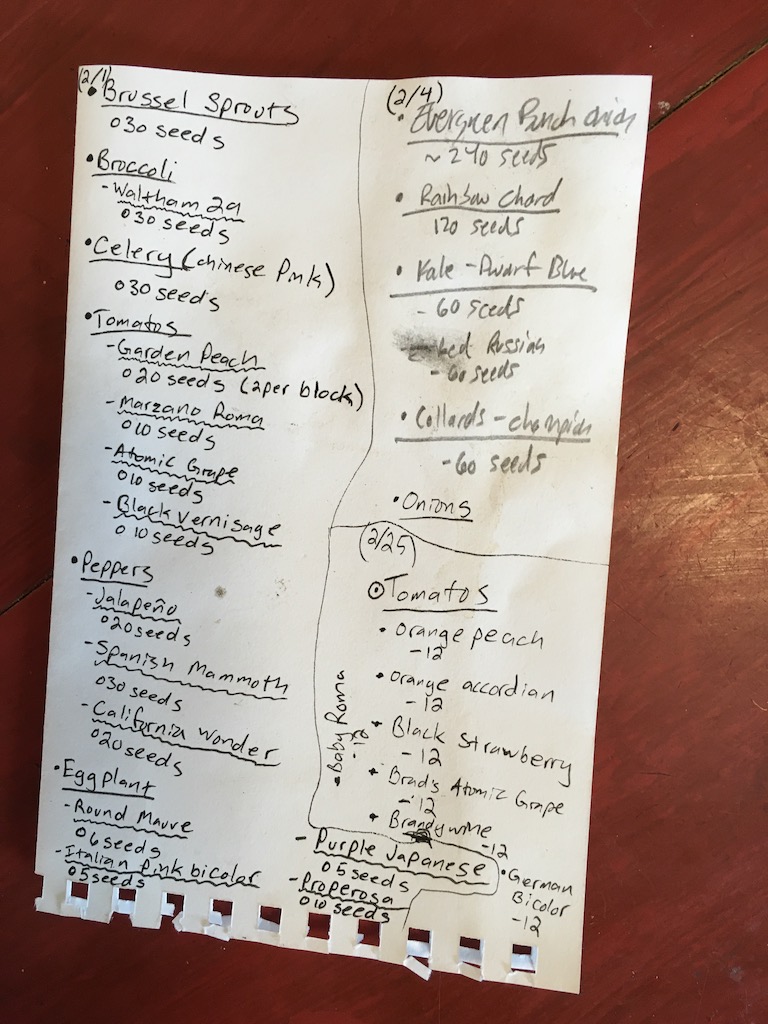 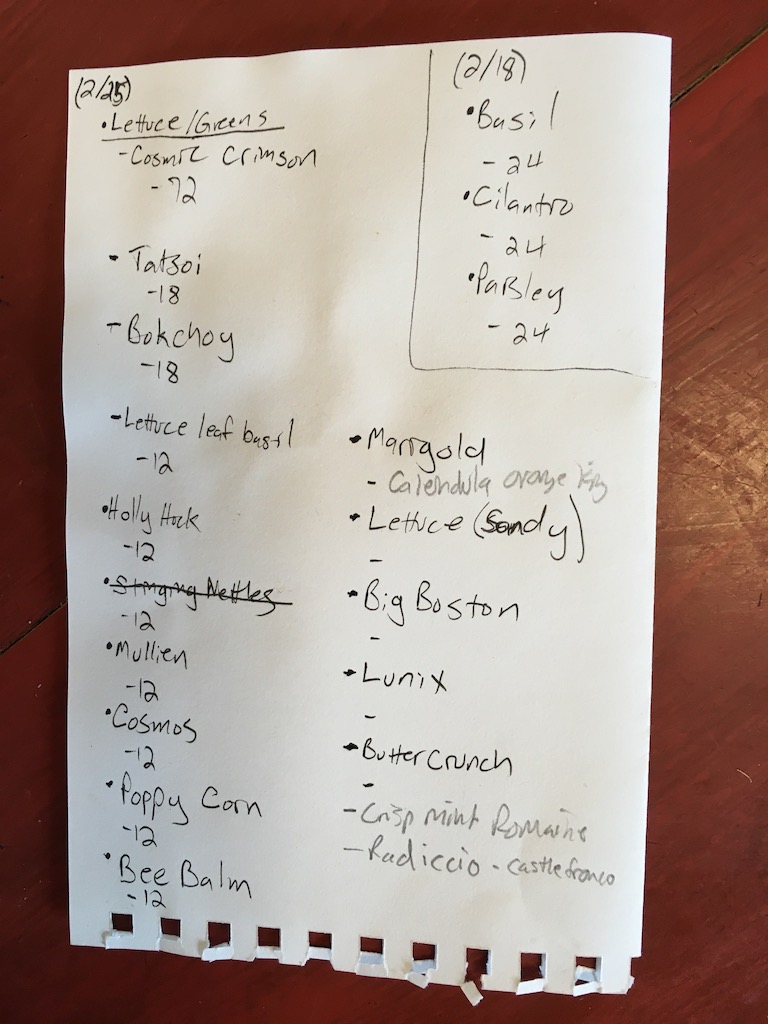 We just lived through a single year of unusual turbulence 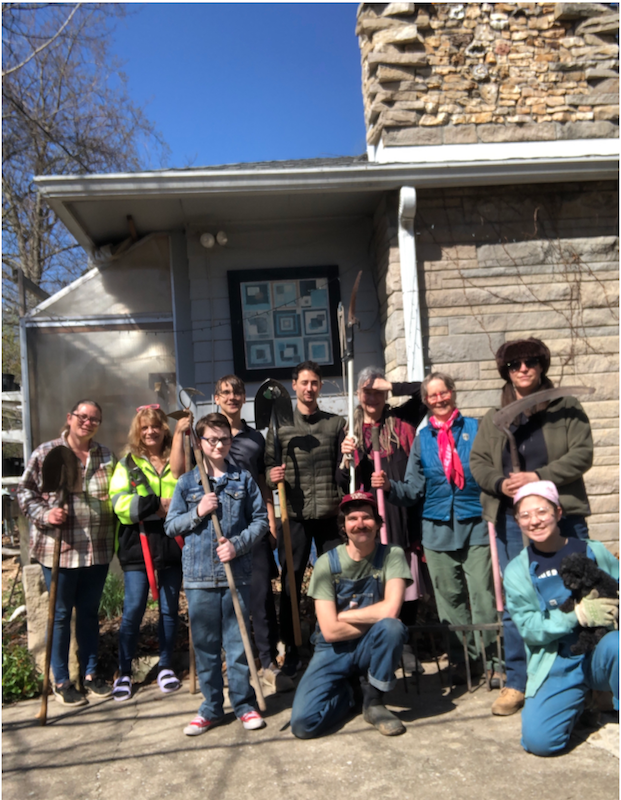 This shot taken last year. All people in it were, or had been, residents of GAPV. Now, all but four are gone, and we have yet to take a new group photo.

For the first time ever, Green Acres Village experienced a year when a total of five people out of nine left us, with each one replaced, amazingly enough, almost immediately. This too was unusual, in that a room will often stay open for a month or two before a person arrives who can blend in with the dynamic offered by a community that values individualism as exactly equal to connectivity, continuously honoring and rebalancing this polarity and others in the 3D world.

In fact, the process went smoothly, as if divinely ordained — so much so that it was only after the year had ended that we realized just how profound the turnover had been! Each person who left was called elsewhere by the demands of his or her own singular path, including Dan, who had been here for five years and finally realized, at his Saturn Return (30 years old), that he’d better learn how to live on his own, since he had never done so! Then there was Andreas, another long-termer of four years, who finally found the job he wanted, and it happened to be in Ireland, as a professor in a university music department. 21 year-old Ethyl moved here in February, full of plans, but then suddenly left, after what I call “seven restless months,” for a permacultural circus in Costa Rica! (She is back now, living with her boyfriend until she travels to the Philipines, and came to visit two evenings ago.)

More often than not, people who once lived here return over and over again to visit. In fact, we got our first “alumnus” returning to live here after several years away last year, too. That’s Justin. Will there be more returnees? Who knows. GAPV is a tiny, potent incubator of human potentiality during a time of dramatic and extended turbulence on this planet. We encourage each other to explore our own inner reaches (and that includes taking responsibility for our shadow sides: another polarity, conscious vs. unconscious), as well as to work cooperatively on common real world projects, with particular focus on the gardens. Not everybody is capable of truly doing both well (especially the shadow-work); in fact, these special ones are few and far between, and tend to very much appreciate what they learn during their time with us.

Speaking of the gardens: last year we tried an experiment, to do the garden work without any one in particular as garden manager. Rebecca, our garden manager for ten years, was the first to leave last year, on April 1, after feeling restless for several years. And just this month, after ten months of false starts, she has landed a new position as garden manager at a retreat resort in Hawaii! More on that later.

When she left we thought we’d try an Aquarian approach (since Jupiter and Saturn had just moved into groups-of-equals Aquarius from hierarchical Capricorn). But, though the gardens produced well, and everybody showed up for work parties, it became obvious that no one here had the kind of personal passion necessary to really focus on the gardens over the long haul. We all showed up, and in fact, in true Aquarian fashion, rotated leadership weekly, but it became obvious that our levels of interest and competence varied so widely as to be almost comical.

So, after the fifth person left, in early December, under strange circumstances, luckily we were able to invite Daniel Atlas, who has been the garden manager of an IU garden for three years, and who simply loves growing plants, both vegetables and flowers, to move here and take Rebecca’s place.  So we’re back to a kind of quasi-Capricorn mode, though Daniel is very much aided by everybody else to find out just what is in what I laughingly call the Green Acres Bible, the gardening practices to which Rebecca introduced us. That includes planting seeds in soil blocks, which he had never done. So we’re teaching him, as he learns to guide us.

We used to have a Page on this site called “Meet our Residents,” but I took it down, since so much change has transpired. Perhaps someday, it will feel appropriate to put it back up!.

Green Acres Village: Let Us Transform Life in the Suburbs

Puppy Shadow and I walked our usual four miles early this morning, and then were stopped on a corner two blocks away from home by an open-faced man, just rolling out of the driveway to a very pristine-lawned home. He asks, do you live there, pointing to another manicured lawn. “No, I live in the jungle up the street.”

Our regular twice-a-week, two-hour work party began at 10:30 this morning, and everybody who could joined in, one or two at each task, all directed by Cherisse (Rebecca), our Farm Manager for seven years. Plus, this morning, a young man, Daniel, joined us. Here he is (on the right), directed by Andreas, who himself had…

via Life in Green Acres Permaculture Village, May 22, 2020

Only one thing has decidedly changed: No more Thursday Community Dinners for the duration, since they inevitably draw way more than ten people. Otherwise, for we who are more in tune with nature than with the existing culture, not much changes here; or I should say, whatever massive, ongoing changes occur in the “outside world,”…

via Life in Green Acres Village during CV Lockdown —