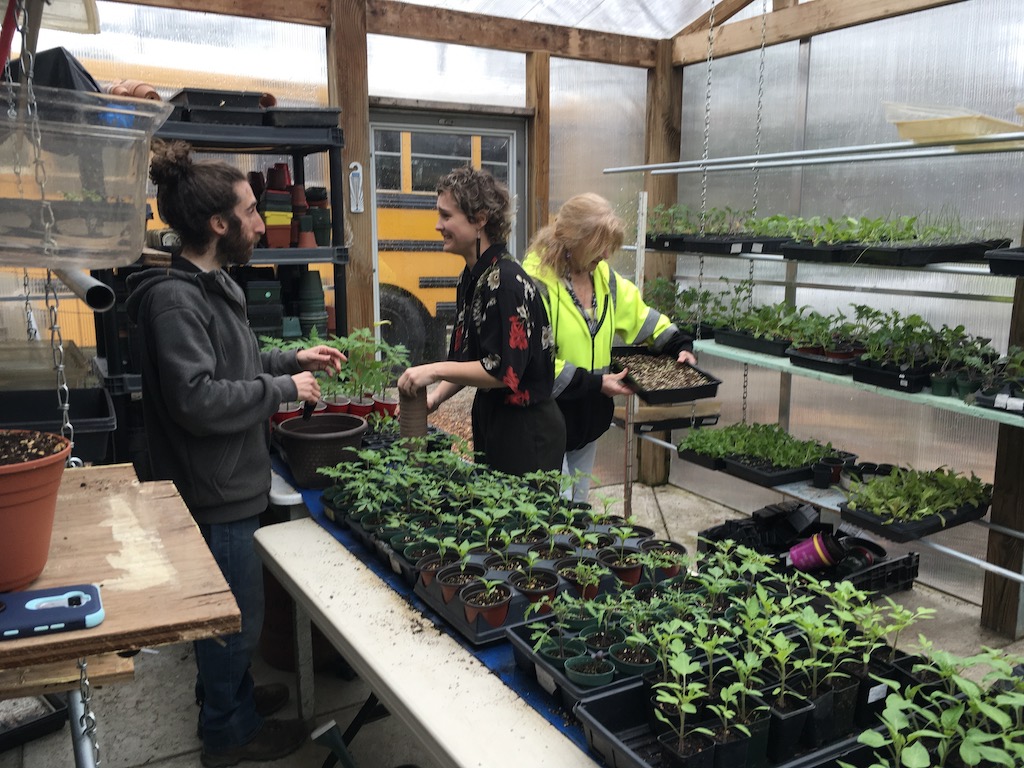 But the big news this past week is that on Thursday we restarted our weekly Community Dinners, after a four-month sabbatical. Yet even on that occasion when I impulsively invited folks out to the greenhouse to check on the condition of the plants, everyone eagerly agreed, leaving ale, wine and appetizers behind. That was exciting!

Then the fifteen of us present “circled up,” as usual, holding hands in a circle; and since everyone else seemed too shy to volunteer, I  said the blessing, mentioning a recent occasion outside of Aldi’s on a rainy day when a tiny old woman approached me with an umbrella, saying she keeps extras in her truck. “Do you want one?” Since I had a raincoat on, I declined, but thanks so much for the offer! She grinned. I grinned. And our day was made.

Just about ten minutes into the meal I remembered to take pics. Just a few, quick, on the fly. 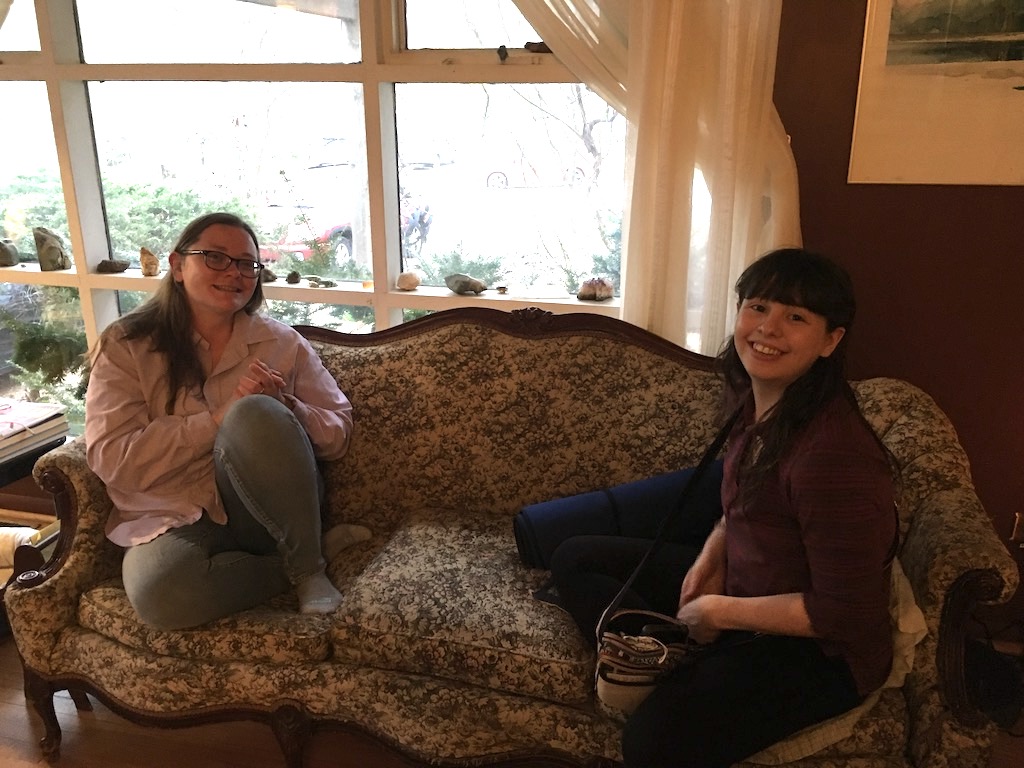 By the way, Sierra, on the right above, told me that we might not see her again, since she’s about to take off for India for the summer, and will move to either Ann Arbor or San Diego for a doctoral program in the Fall. Living in an academic town (Indiana University, Bloomington), such comings and goings are, unfortunately, for us who remain, typical! 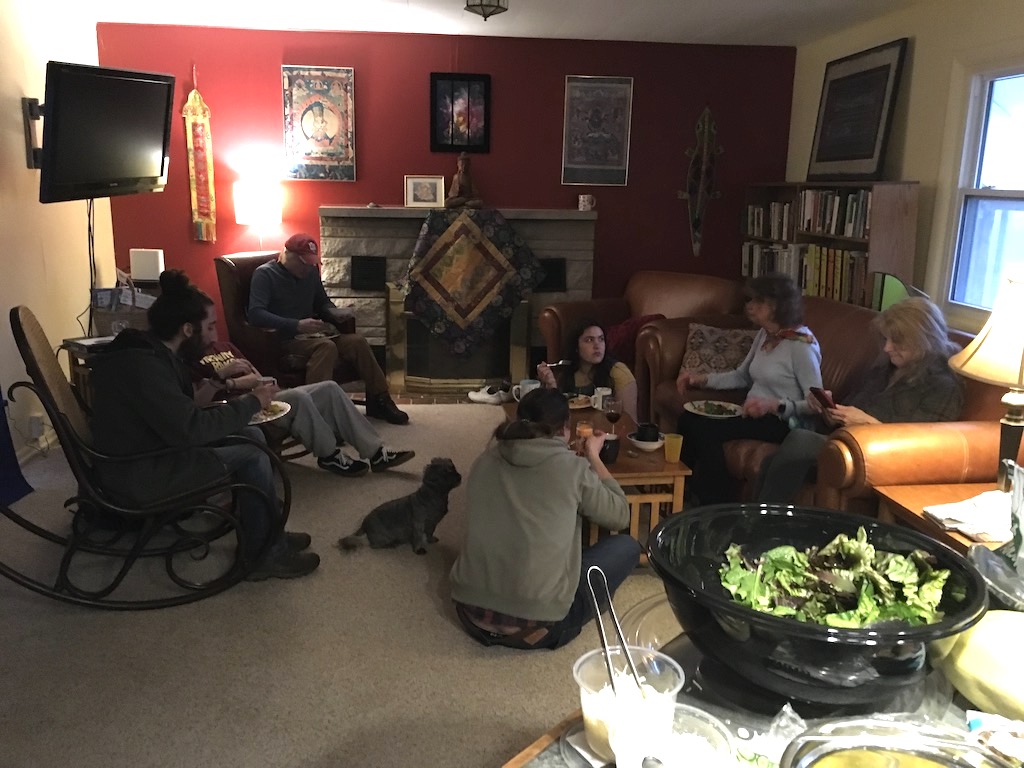 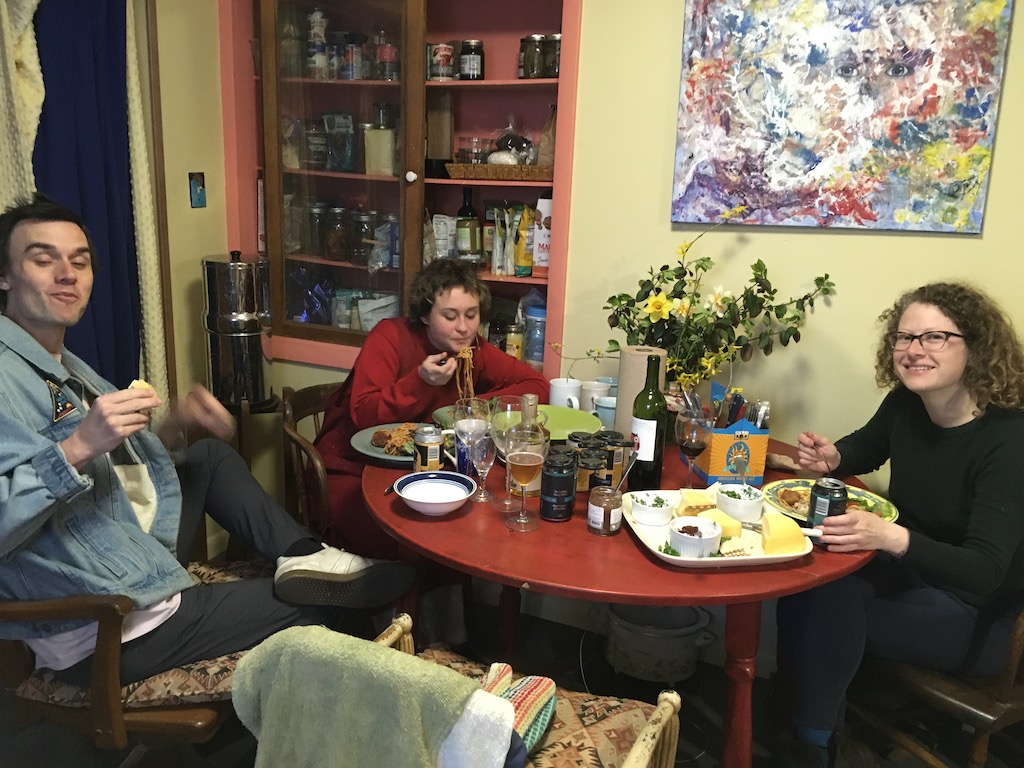 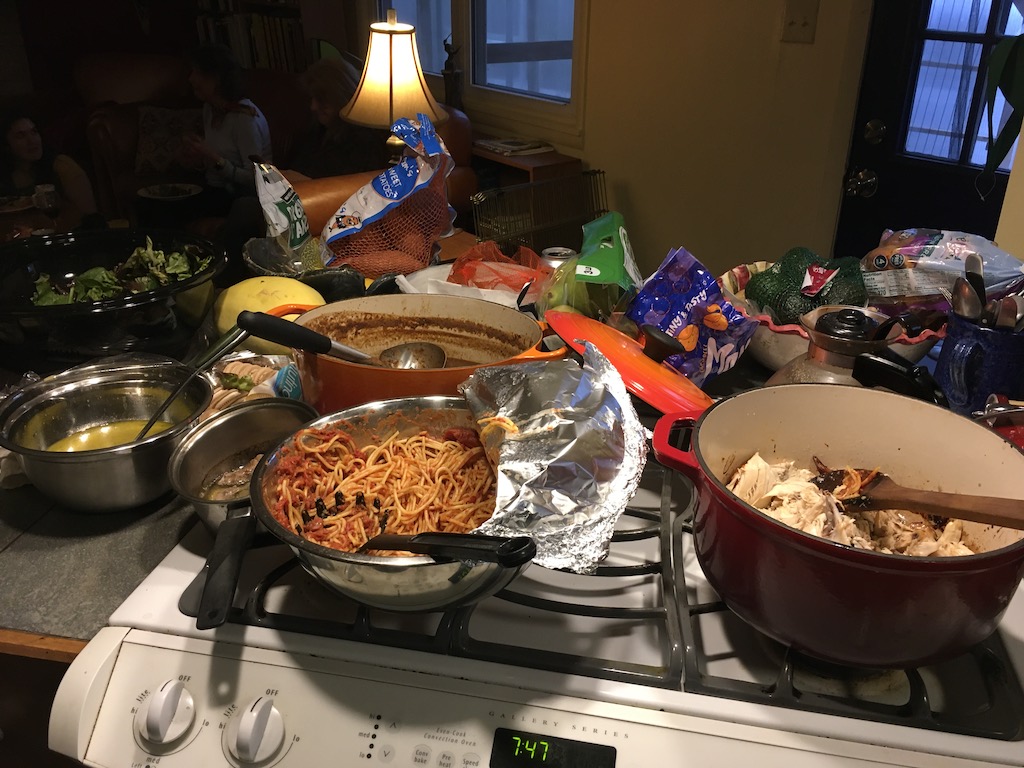 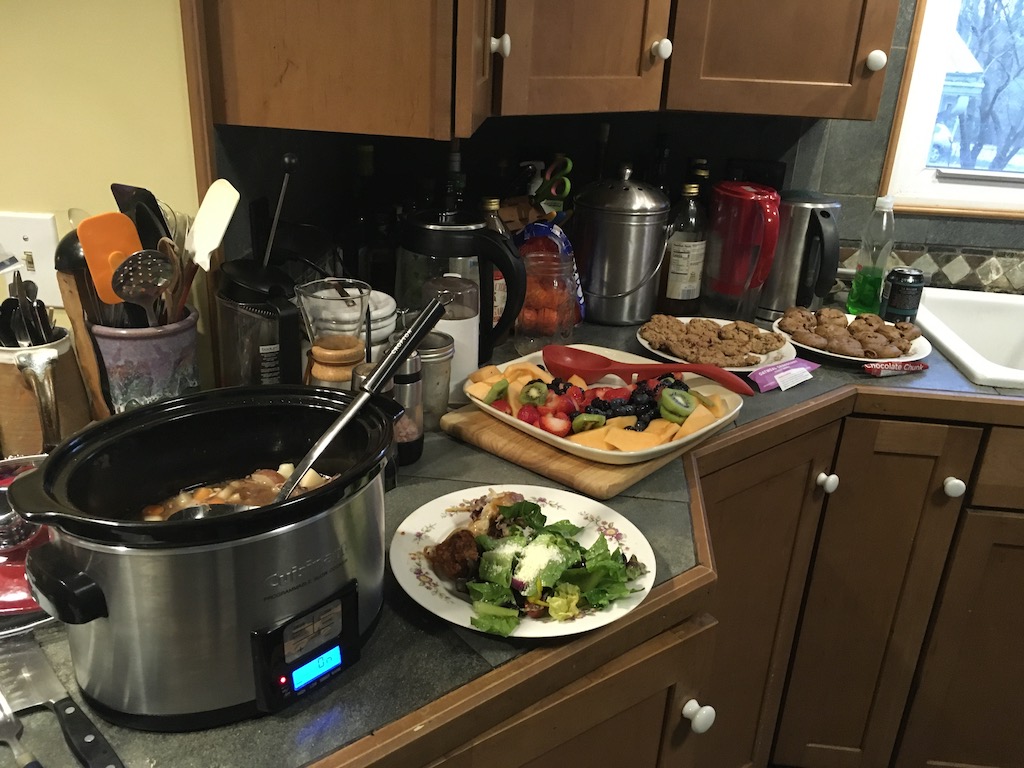 Friday morning found Marita in the greenhouse, off to the side, transplanting. 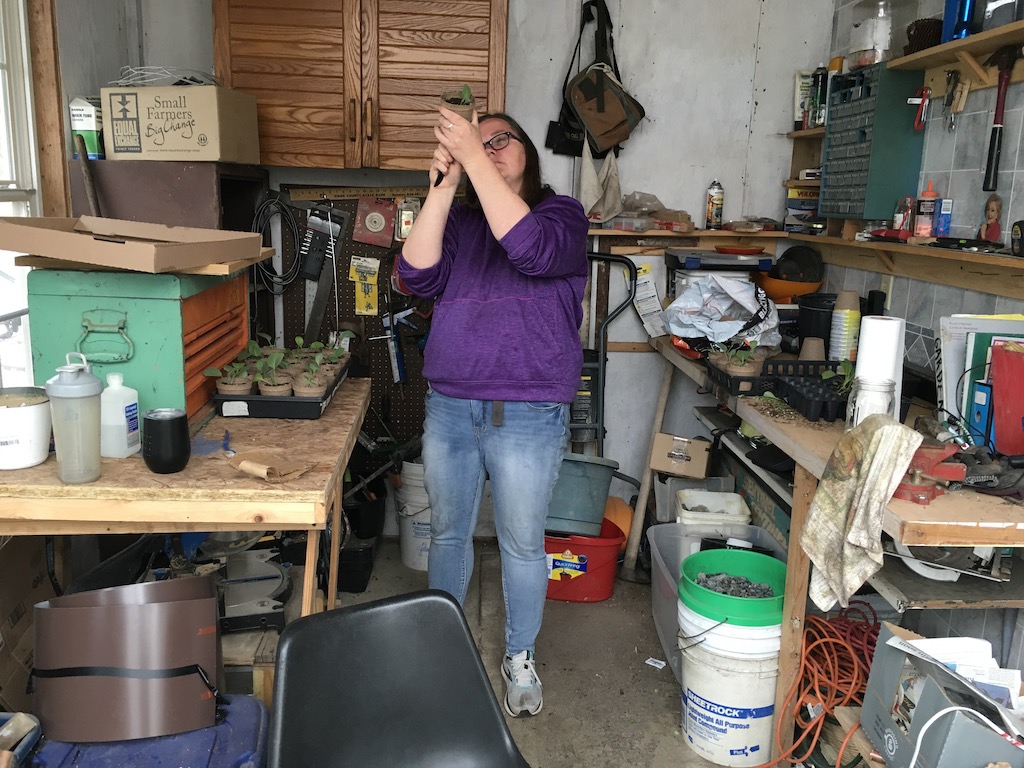 And of course, Daniel, who tells me, with a giant smile, that he checks on the plants three times a day, he loves them so much. And yes, you can tell they are loved! 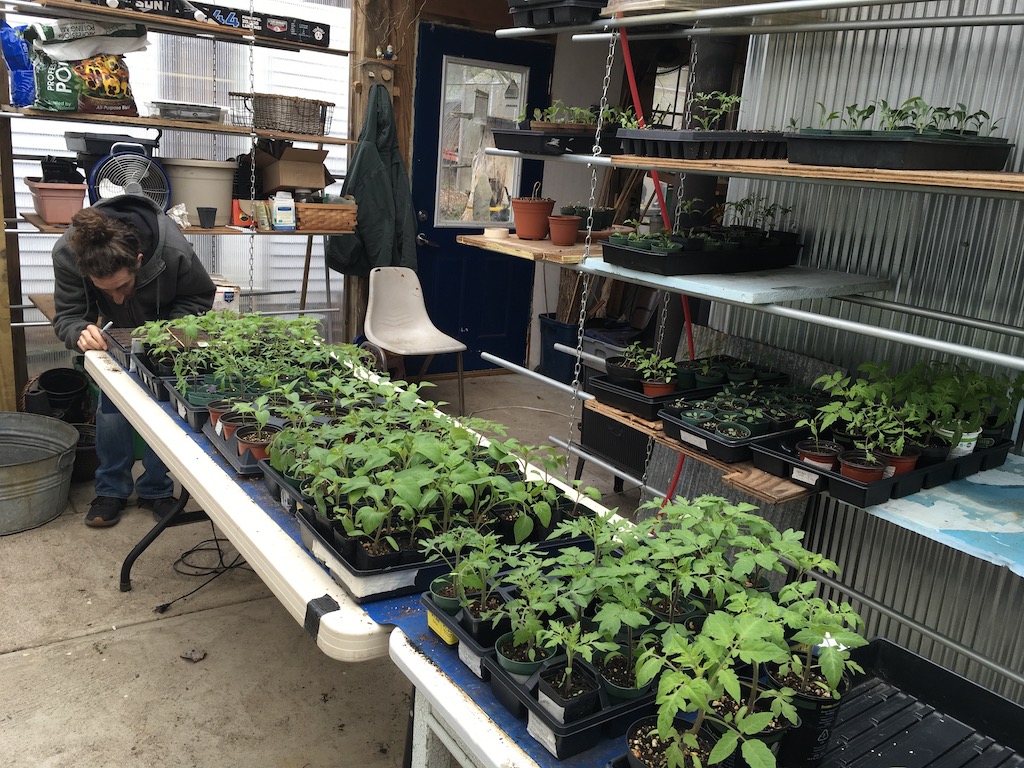 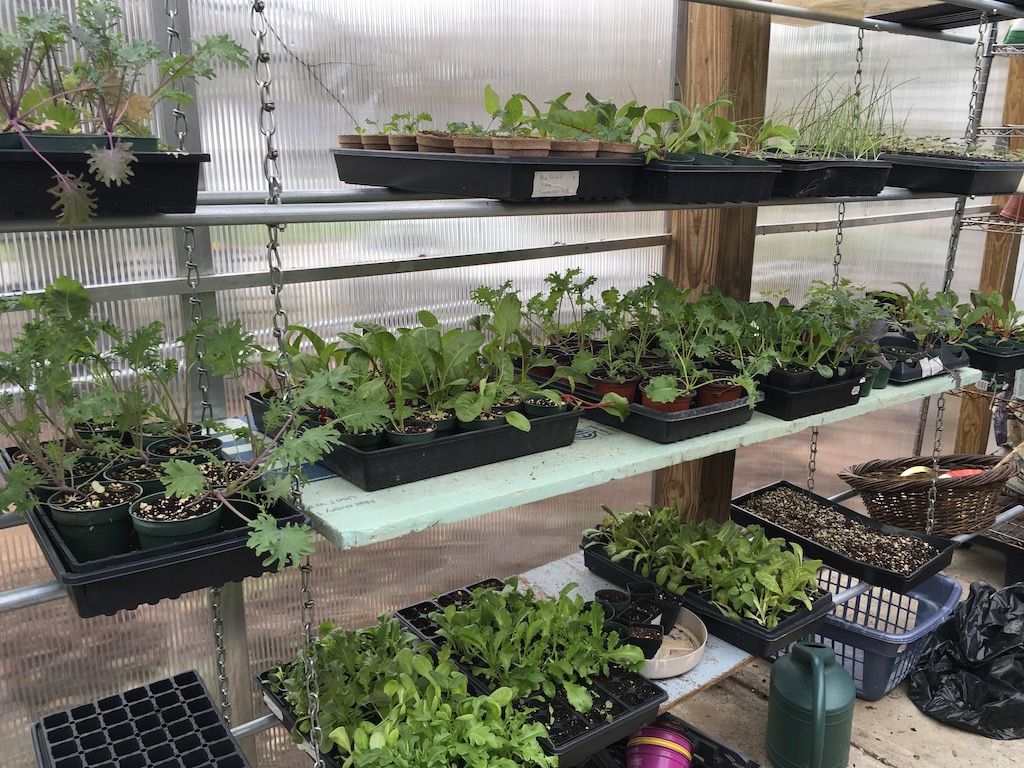 But then, oops! Today at 11:00 AM I went out there to take pics for this post and found both doors still closed, heat mat still on, fan off, covers on the tomatoes, and lettuces, and the temperature in there was 100°! Yeeks! I opened both doors, pulled the plug on the heat mat, uncovered the plants, and turned on the fan. Then came back inside and texted everyone about this, saying once again, that without a list in there of who is to water on which days, I didn’t even know who to remind!

Instantly, Daniel texted me back. It was him. I presume my text reminder will prompt him to actually print out the list? (Or I will, hell! Just email it to me!)

Then, when I looked at the photos I took out there I saw that I had not removed one of the covers! So I went out and did that, noticing that the temperature, after that short amount of time (ten minutes?) had already dropped to 90°.

Here’s the photo that showed me where I screwed up! 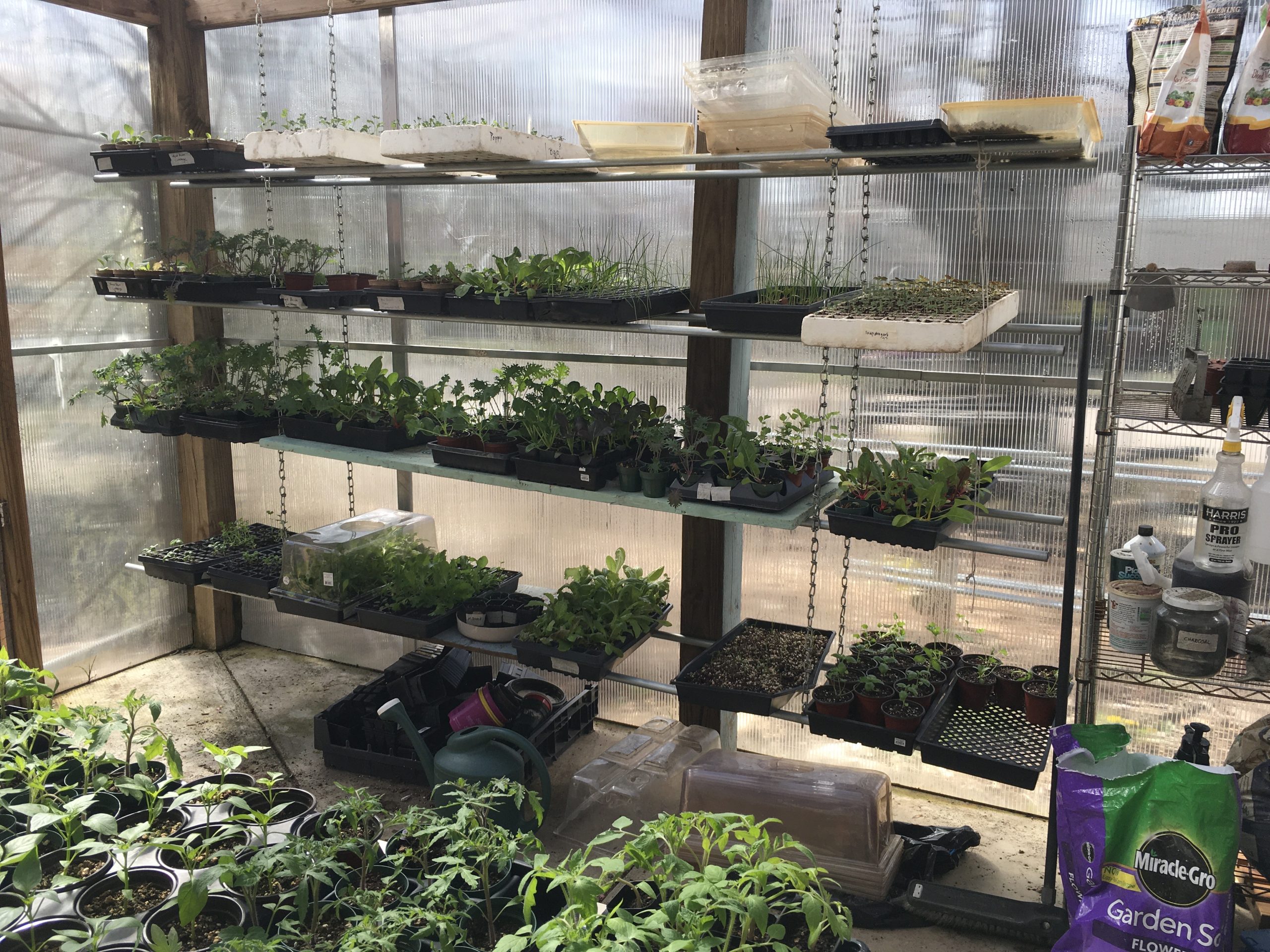 So while it may look like all is running smoothly out there in the greenhouse, know that we are all fallible, and that plenty of zagged human dramas accompany the steadily growing plants — which don’t seem to even notice our strange ways. Or maybe they just forgive us? Could be. If so, thank you, thank you from the bottom of my wild heart, dear plants, and dear natural world, and dear universal light/love that powers the entire panoply of Life here on our beloved Mother Earth.

Our twice weekly work parties are gathering steam, thanks to the sun’s role in life on earth. March Madness? Not here. Instead, productivity.

In and around the greenhouse, Joseph, Aya, and Daniel especially have taken charge of repotting little seedlings in bigger pots when their roots need room. Daniel and Marita have been doing most of the watering, but this task will likely get divvied up further among the group at tomorrow evening’s monthly meeting. 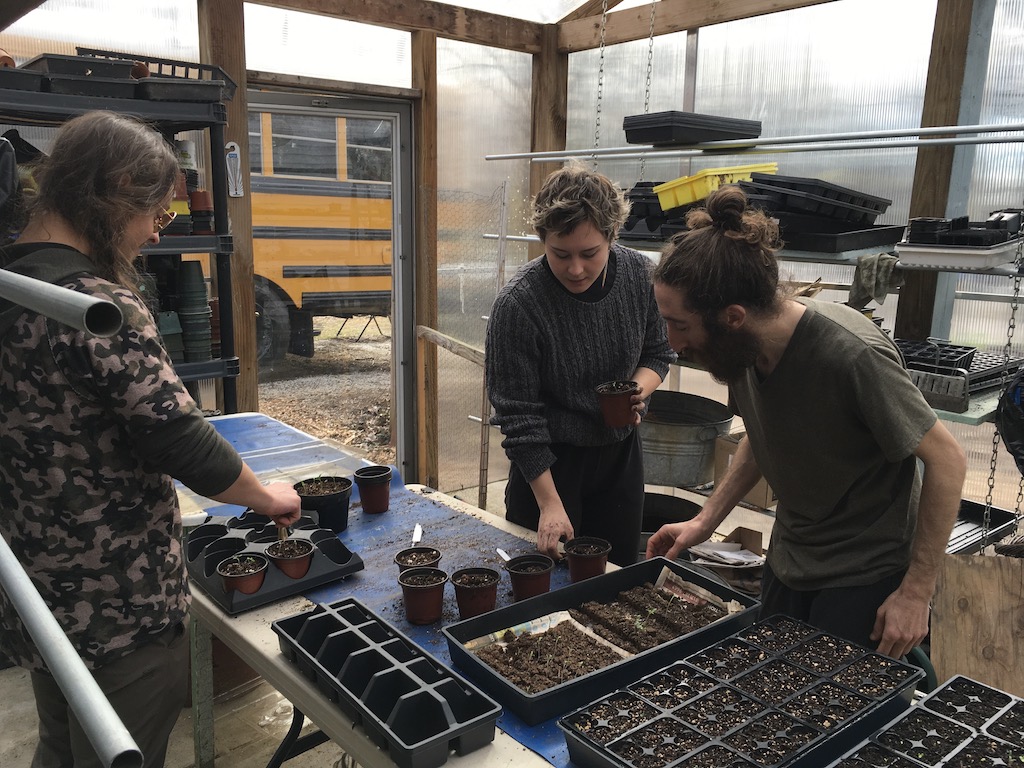 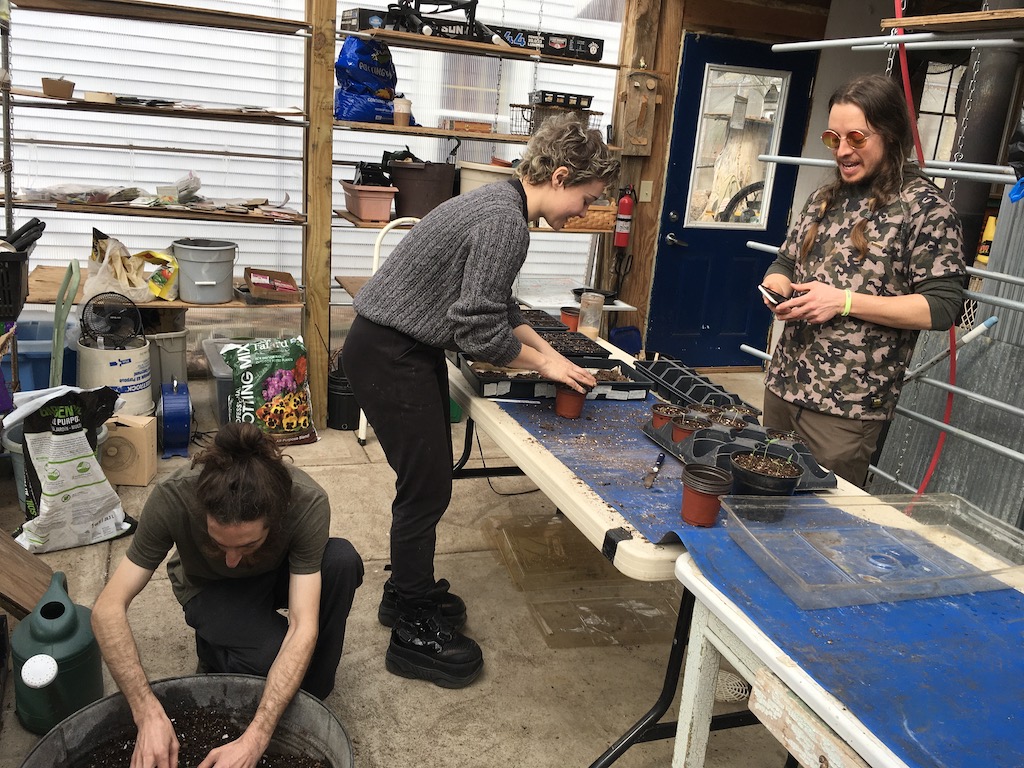 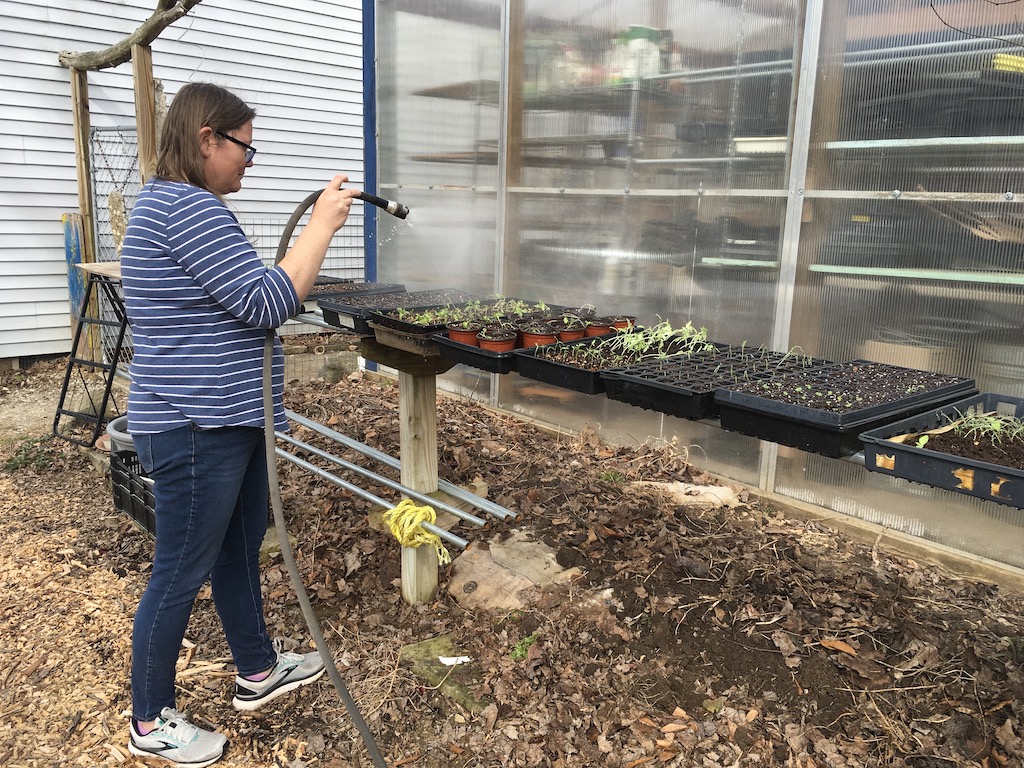 By Friday, more of the seedlings needed repotting. Here’s Joseph, with tomatoes, working in the back. 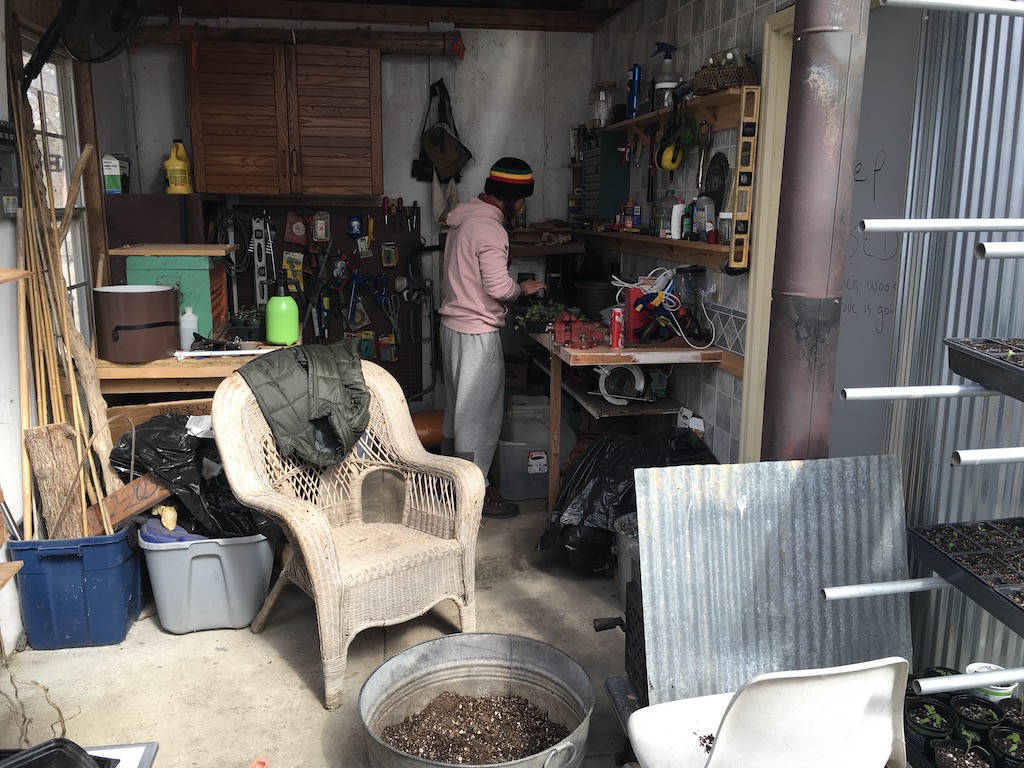 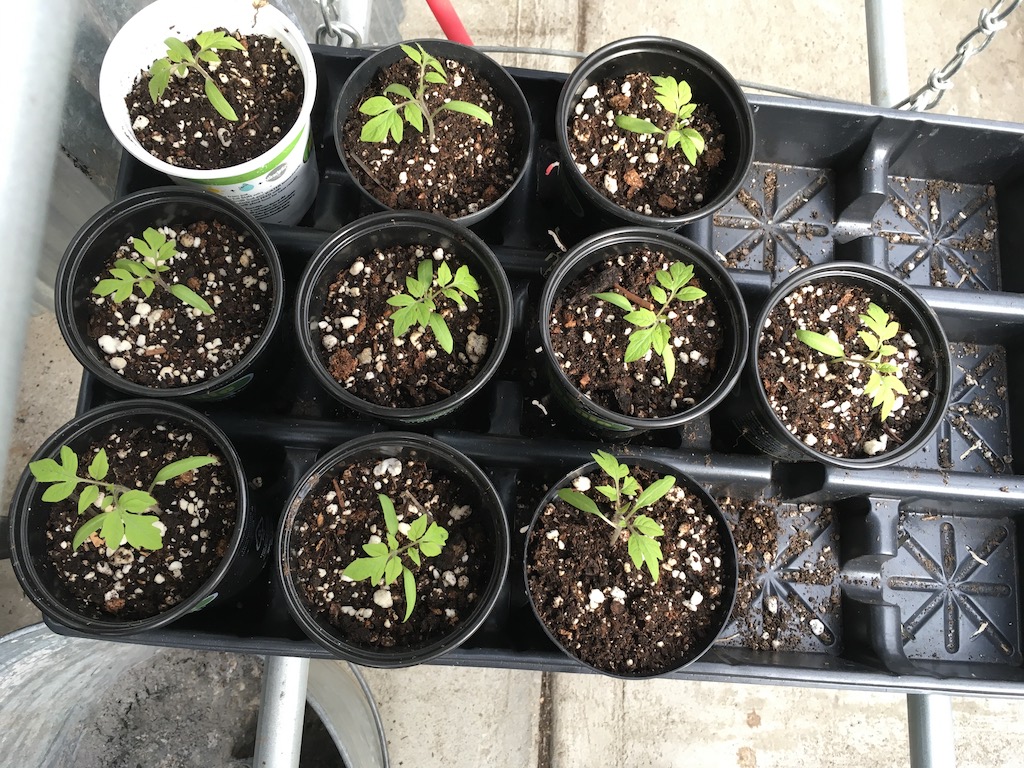 Also, on Friday, a friend of Annie had shipped some blueberry bushes to her, four of which we decided to plant by the fence along the road, where neighbors who walk by can also feast on them. 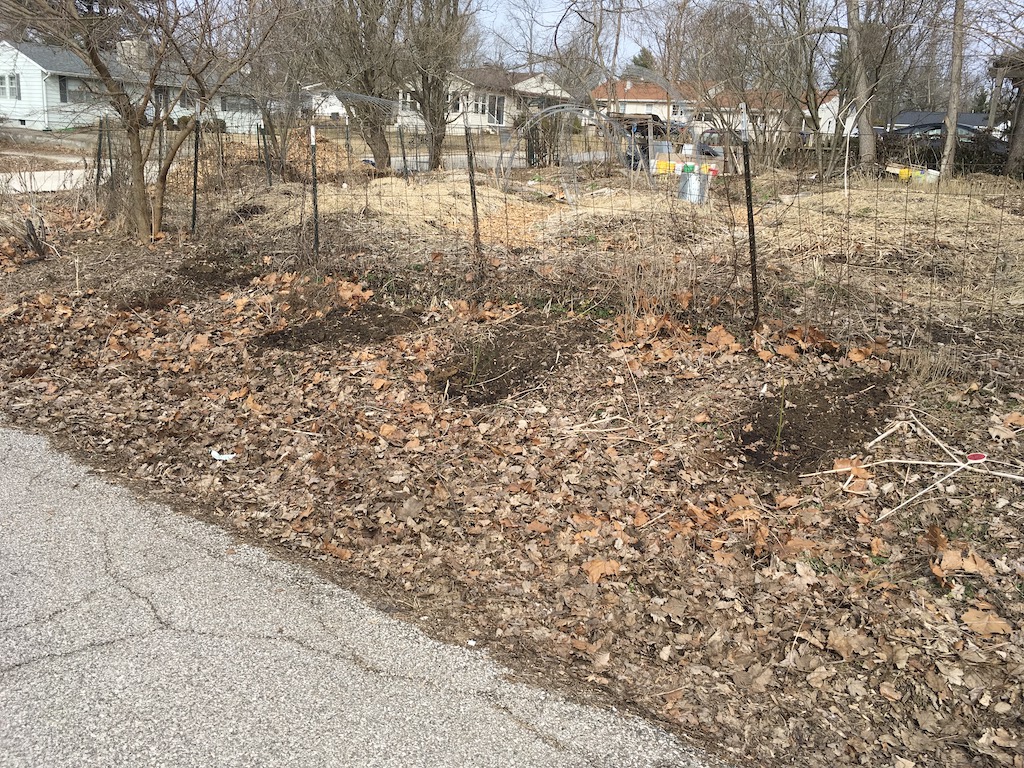 They’re tiny right now, but will grow, and imagine they enjoyed last night’s gentle rain. We planted them with a bit of our homemade compost in each hole.

Finally, there’s the garage wall, which was identified as a problem that needed to be fixed when the rental inspection person visited that property (an every three year occasion). The fix, according to the city, was simple, just repair the sill to one window.

Well, my son Colin didn’t agree. He said the entire wall needed to be exposed, because who knows what kind of rot is in there. But Colin has been suffering from a nerve problem in his right shoulder and arm, plus his bad knee was acting up. Luckily, I was able to postpone the re-inspection, twice. But the third time was told sternly, that this is the final appointment. If we cannot make this appointment I will have to go before some board of appeals. That was about a month ago. Theoretically, we had plenty of time, since the drop dead date was March 10th. But it wasn’t until this week that Colin felt his body could handle the work (he is scheduled to do a lot of things around here that require carpentry skills, in exchange for parking his bus in driveway, and use of the garage as a workshop for him to “trick out” the bus.

Okay, that’s enough backstory. I won’t go into details of the last time this garage was  the focus of the city, during the last rental inspection three years ago, when, after much miscommunication from both sides, we did have to go before the board of appeals, and they told us to paint it . . . in the middle of February . . . or else! So we did, gathering ten people together on the one day in February that was above 45 degrees.

Here’s the chronology of the wall, so far. Colin tells me there’s only about five or six hours of his work left, and Marita has volunteered to paint it. First, this is just after he removed some of the rot. 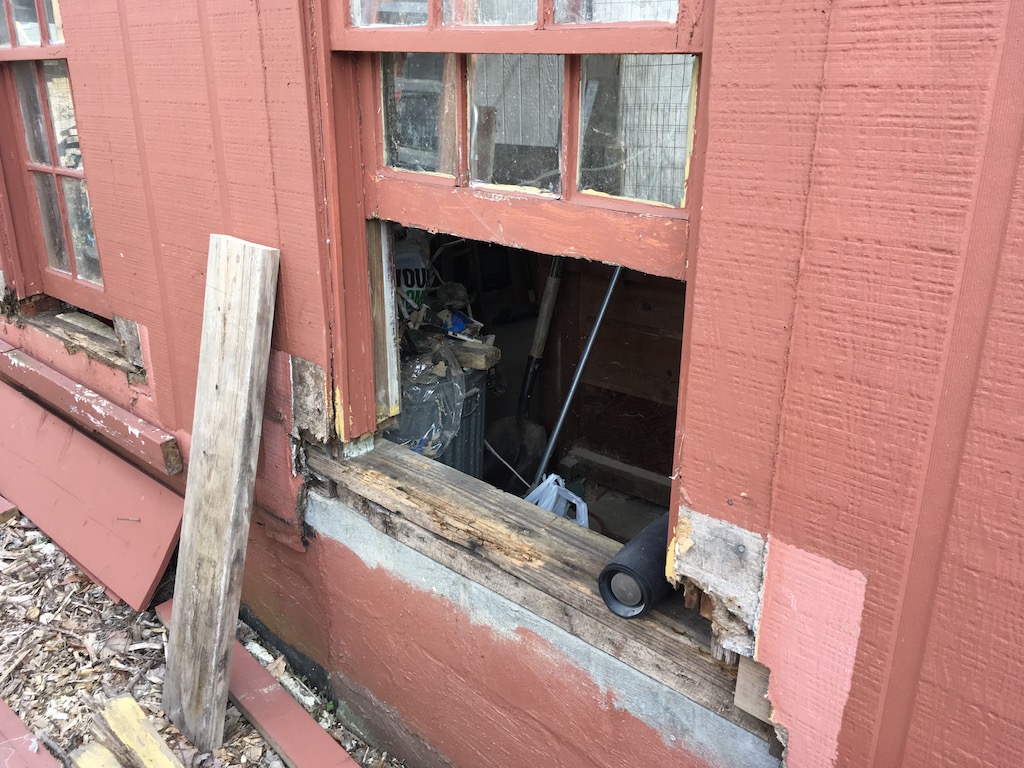 Then, deeper and deeper into the morass, which he was definitely anticipating. 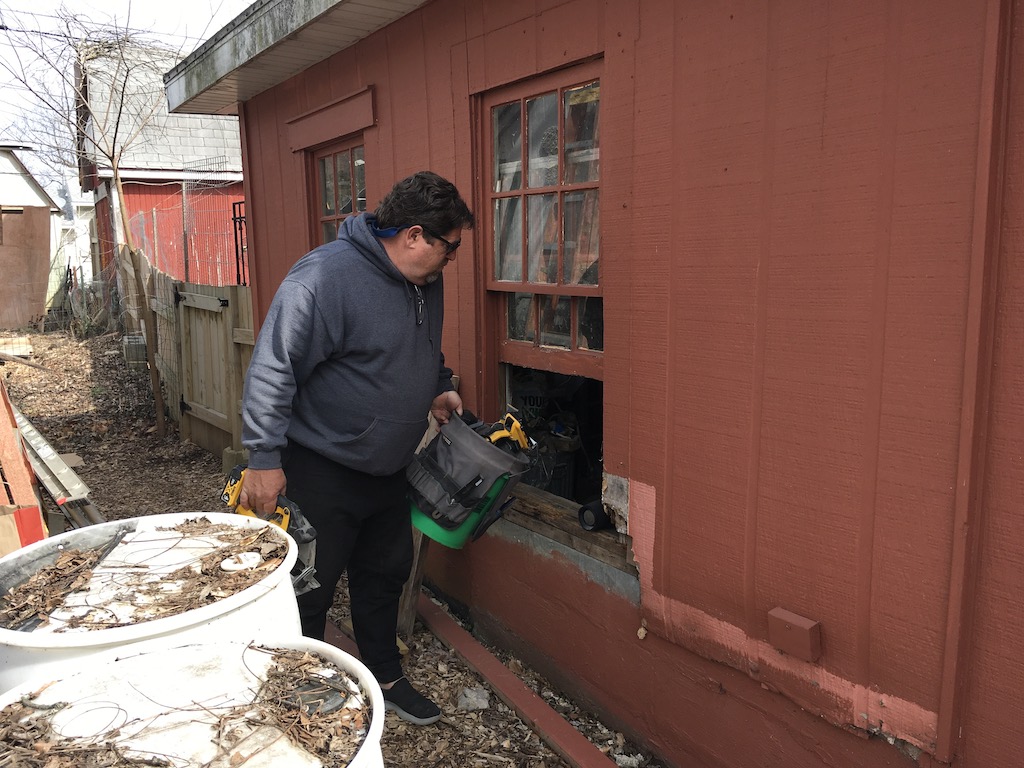 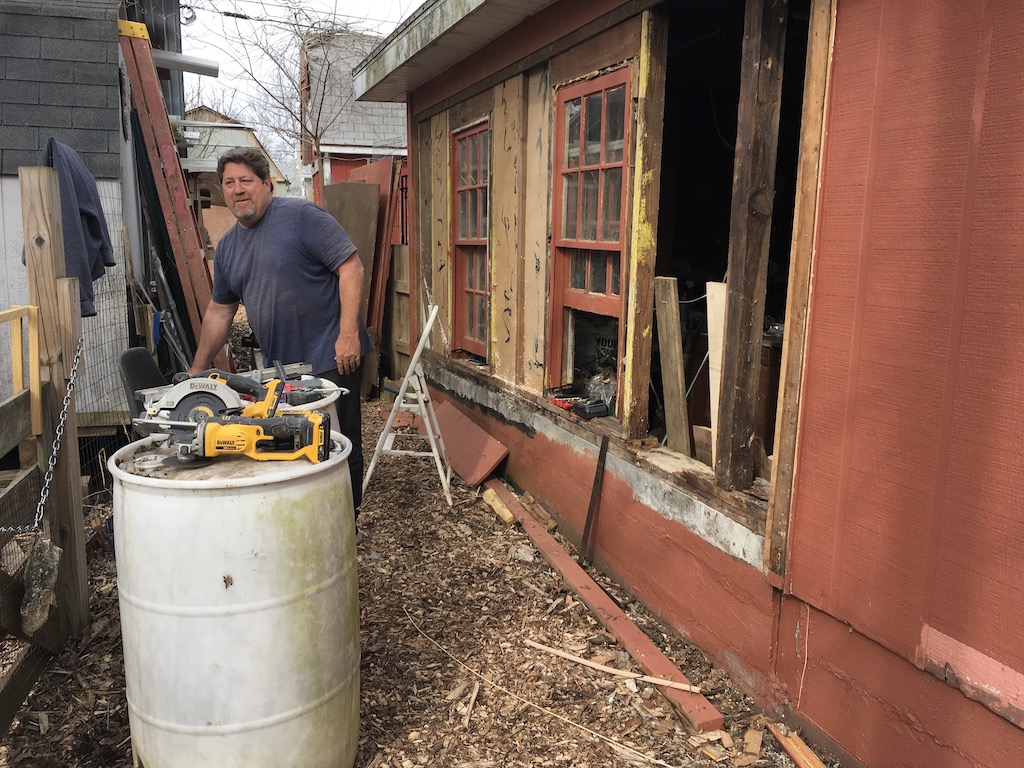 We already had two windows here from Habitat ReStore, which he used to replace the old ones. 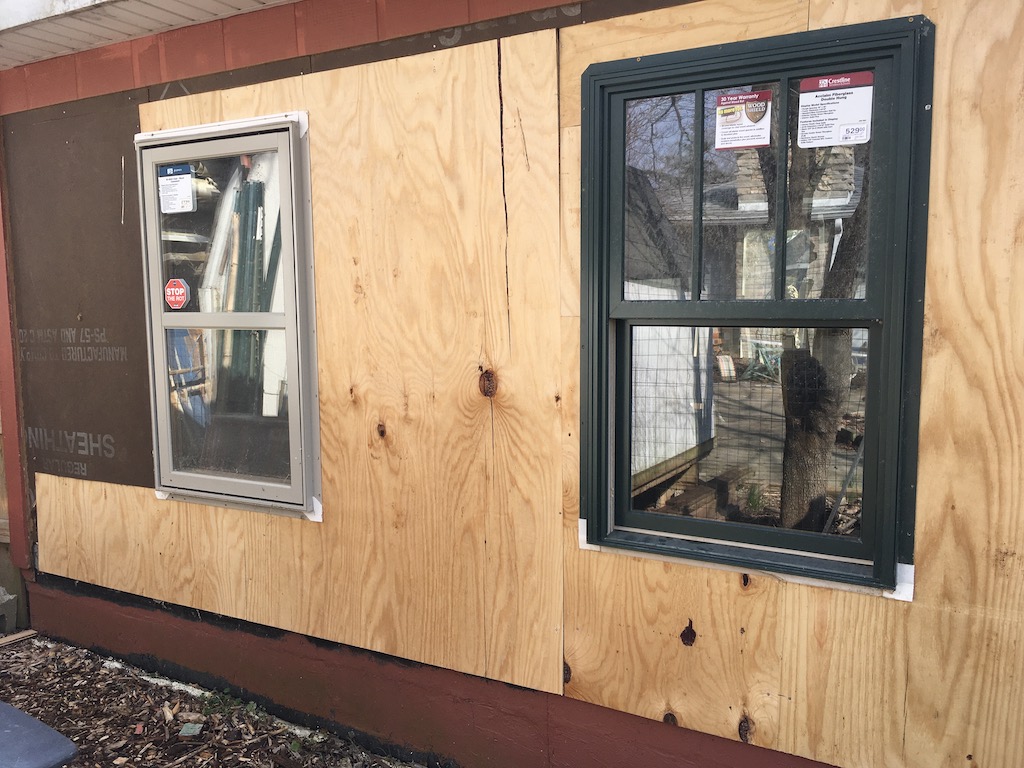 So let’s see, this is the 6th.  . . supposed to rain either today or tomorrow. But Tuesday the 8th should be fine. Okay, if all goes well, we will make that March 10th deadline. Whew!

Finally, chicken inspecting bluebells on other side of the fence. 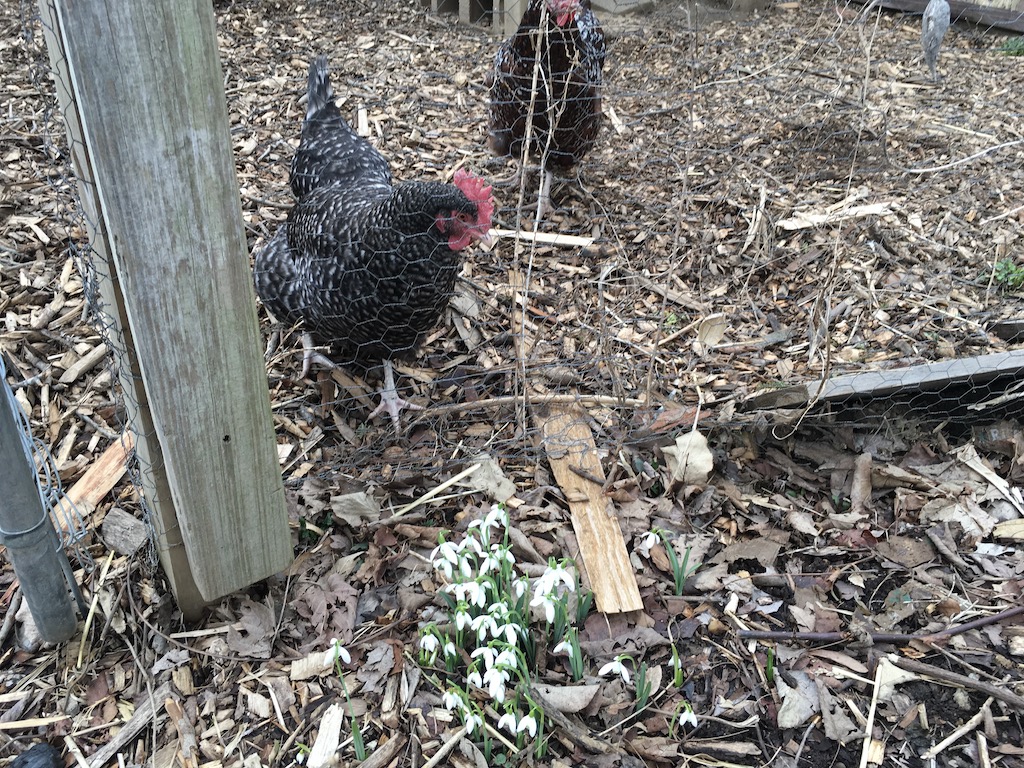 Another rainy and overcast Thursday morning at Green Acres — but there was no complaining! The main task was to meet to build compost in the main garden, while Rebecca started some seeds in the greenhouse to go into the garden towers.

But first, Ann and Rebecca decide on the front bed at DeKist 2 to plant the berry bushes we have. [These photos reminding me I better get out and harvest some mint before it takes over!]

Solan and Alex weed the front of Maple house gardens.

Dan inspecting the garden on the left and assisting Justin with the compost before the turning begins.

Meanwhile, Rebecca is back in the greenhouse — starting greens — with Hank overseeing

After spreading some seasoned bale straw in the main garden, I took the tomato plants out to harden them before preparing our house for a great turn out for community dinner in the evening!  I couldn’t help but notice newspaper headlines being put to their best possible use…

Ann addresses the work group about her experiences at convention [read more about her trip on exopermaculture.com!]

With the warmer weather upon us, it’s time to start ‘hardening’ the plant starts. Solan explained that all the plants in the greenhouse have been babied and must be put outside on different rotation times throughout the week to get them ‘hardened’ to exposure to wind, rain, heat, etc.

While the rest of the crew were planting herbs in the greenhouse, Dan, Solan and I head outside to plant the first two beds of potatoes. Dan checked the soil temperature before turning it with the broadfork. Solan spread bone meal while Dan proceeded to make some divots for each potato start. It was time to put my phone down and get my hands in some rich, dark dirt!