Mid-summer. Life is very busy. I’m out in the gardens most days for an hour or two, working either alone or with others. Plus, yesterday, we borrowed neighbor Dave’s truck and transported two giant loads of the “debris” that either falls, is cut, or pulled up around here to Good Earth, a large, well-run local composting operation that has been in business since 1977.

As we were filling the truck bed for the first time, neighbor Lois stopped by, asked if we could take the pile next to her driveway. Yes, with the second load. In return, she handed us $20, which we could use to help fill Dave’s truck with gas.

People to people. Connectivity: inside the household, inside our tiny three-home village, inside the neighborhood — and beyond.

On our way to Good Earth, we passed May’s Greenhouse, which has been in business even longer, since 1965.

Here and there, in the midst of growing corporate conglomeratization of what used to be locally owned and operated businesses, some do still exist, on back roads.

I can remember when we tried to get a “buy local” movement going here. That was probably 15 years ago. We decided that the public wasn’t yet ready. That they wouldn’t grok the idea that money can circulate locally, rather than draining out to large corporations. Fifteen years is a long time. Much has transpired to prepare the public, not the least of which is the growing need for locally grown food.

Our gardens are so prolific that we also feed neighbors and people served by Mother Hubbard’s Cupboard.

All across this country, local businesses and nonprofits serve local people. Though those who ran the covid plandemic tried to shut small businesses down, it didn’t work. Many are still going. Many more are springing up.

As the federal government continues to falter, the need for downsizing it grows. States and localities pick up the slack.

And ultimately, it all comes down to each one of us. We are all sovereign beings, here to express our own unique natures fully into the world. How? Begin small. Begin with what’s lodged in your heart. What would you be doing if there were no obstacles in your way? The universe bends to support those with clear, focused intent.

Even better: Learn how to think and operate, as much as possible, “below money.” In other words, let us learn from how Nature does it, with each species gifting to others of its surplus and receiving what it needs in return. This is called “the gift economy.”

Here are a few photos I took this morning. 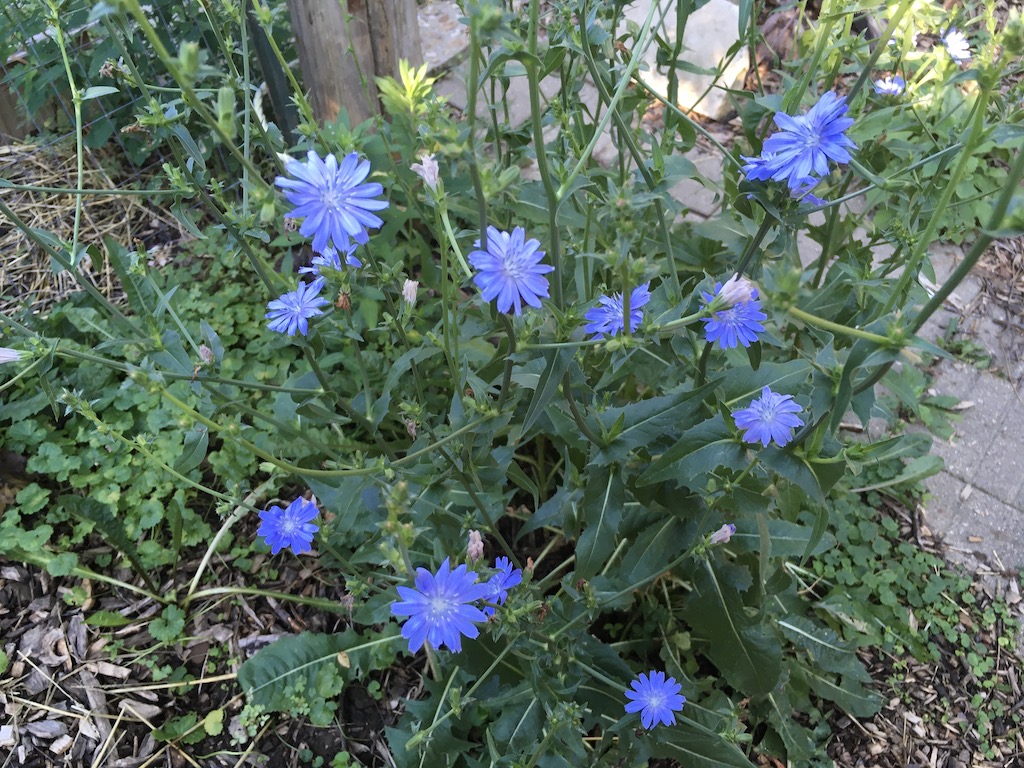 Chicory loves to grow in the cracks, and its bright blue flowers, to me, even more beautiful than those of the robin’s egg. 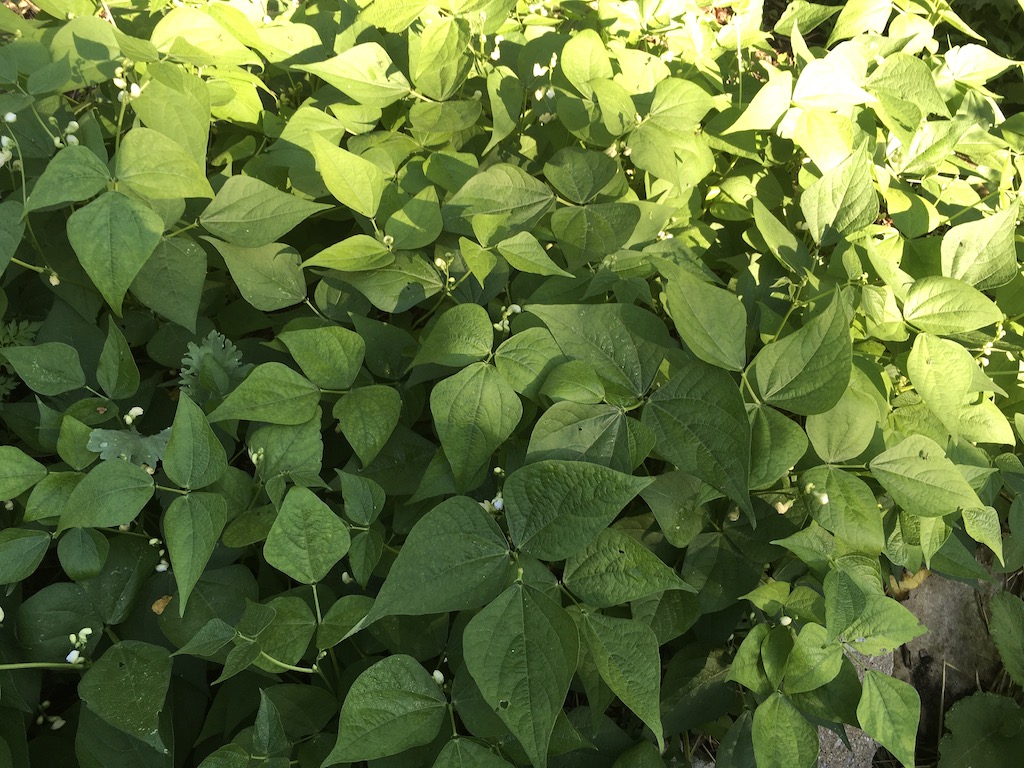 We’re about to be inundated with bush beans. 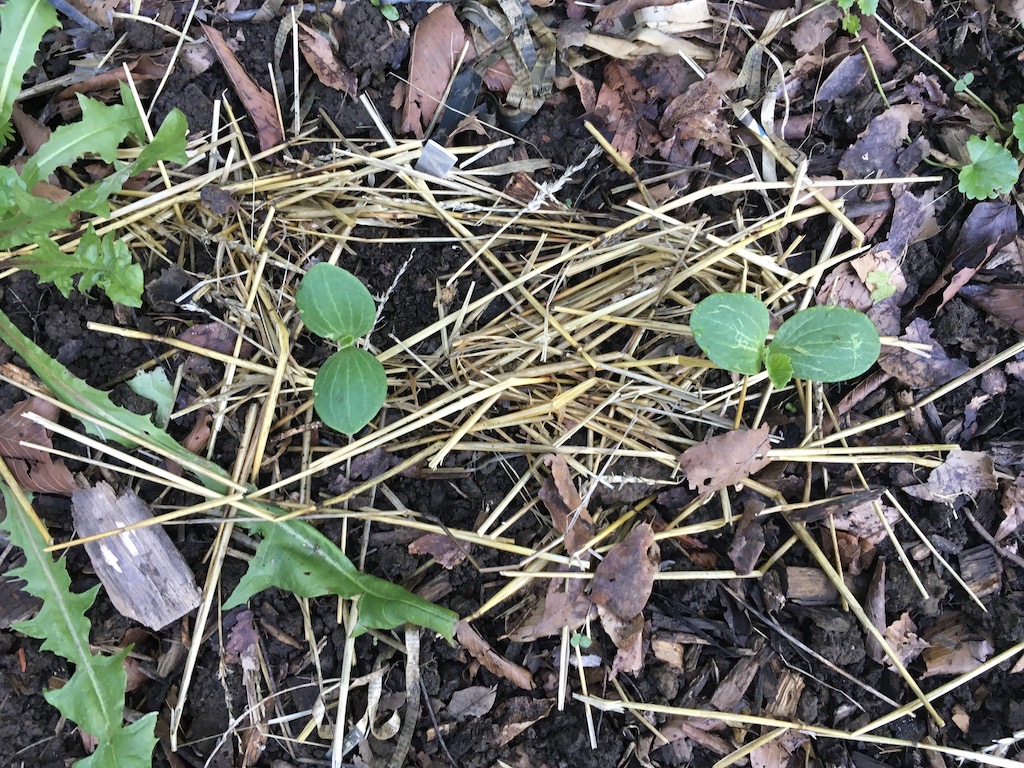 I planted these winter squash seeds about ten days ago, and now must wait three months for maturity. 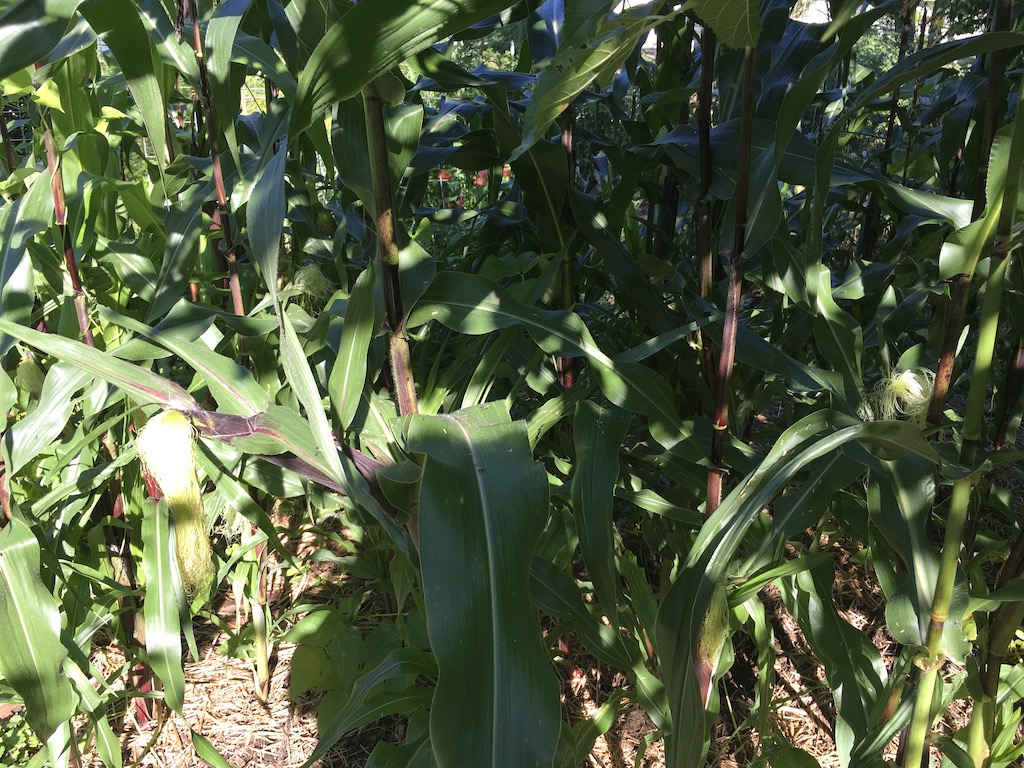 We got corn! Though the intent, to grow the three sisters — corn with beans and squash — did not work out. 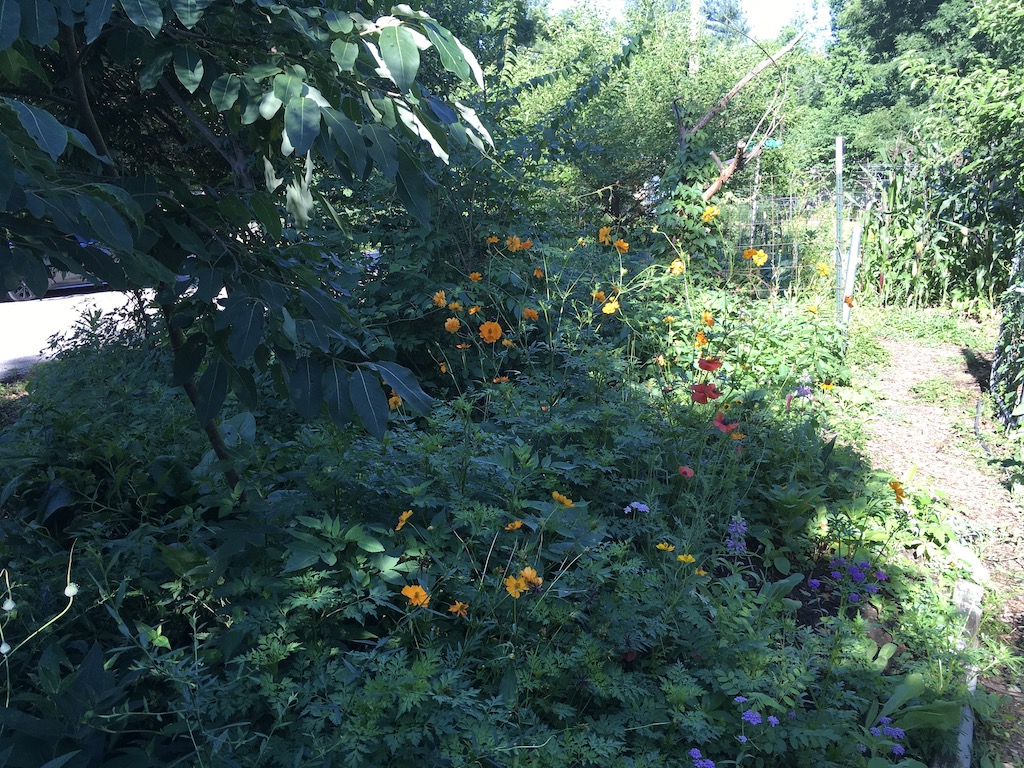 A wildflower garden grows atop a hugelkulture bed we constructed this year to cover up a large hole that had caved in (old septic system). Best way to make sure nobody falls into the hole! 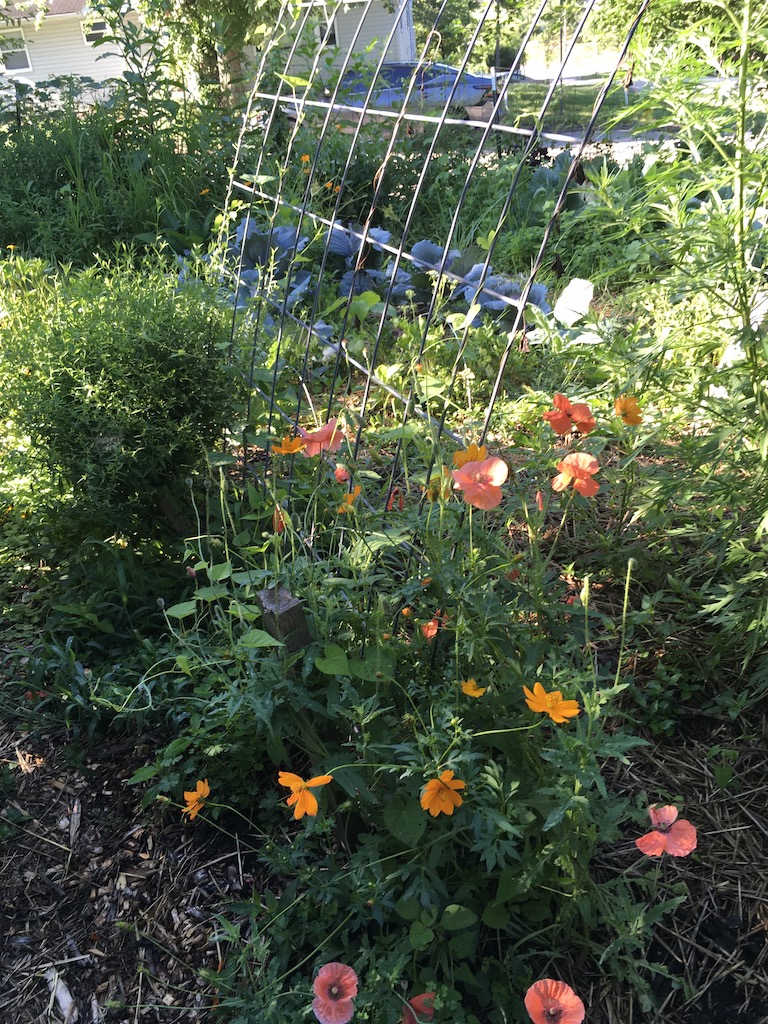 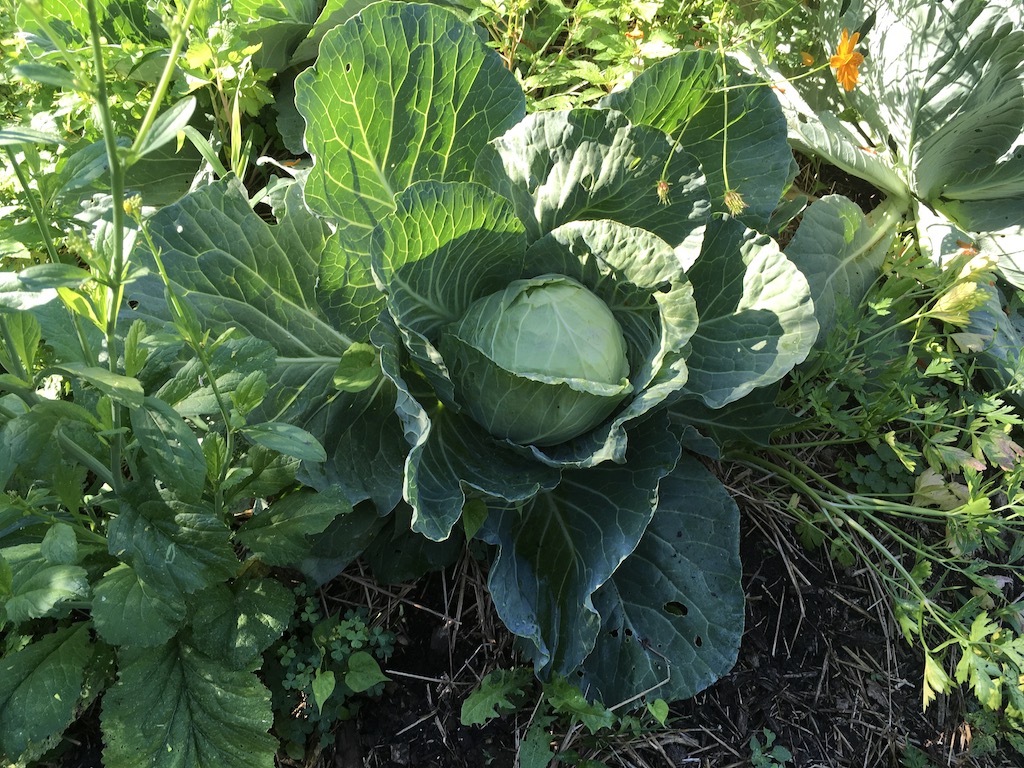 The green cabbages continue to expand . . . and see post from July 5, “Cabbage Bonanza!”. 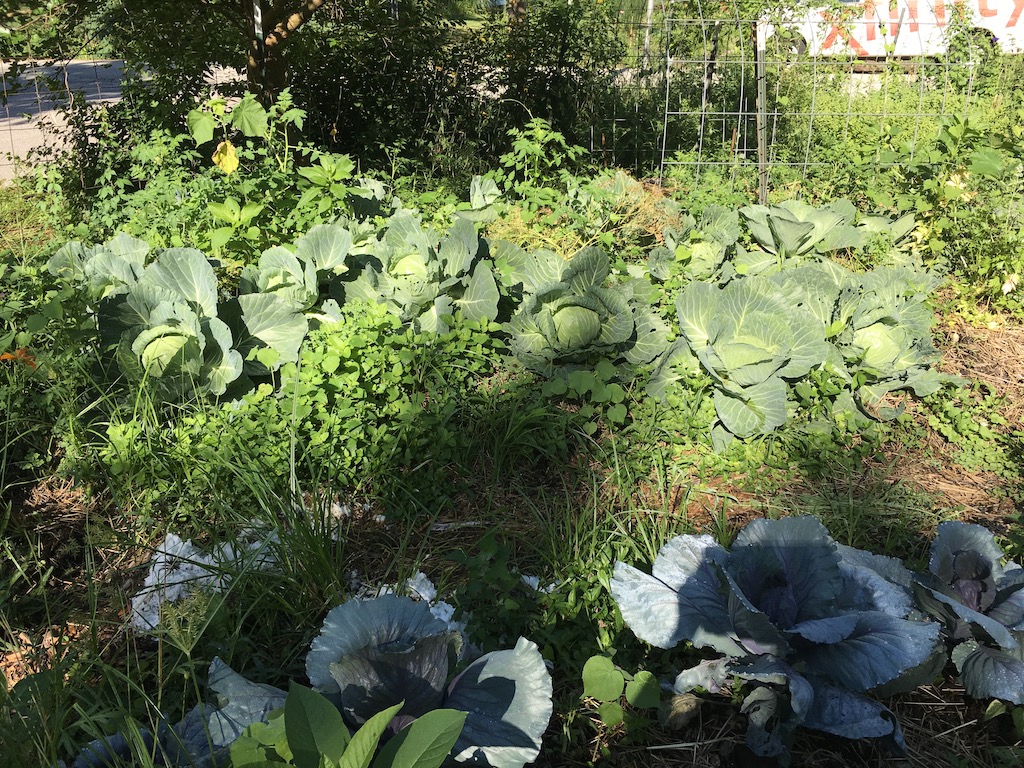 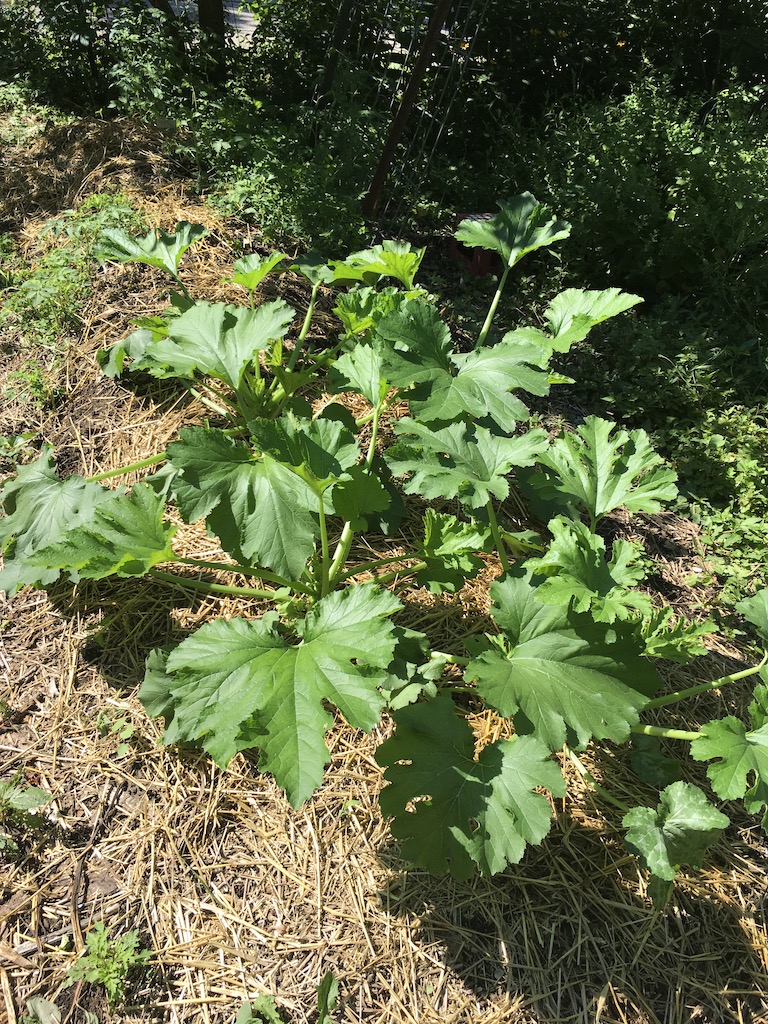 Zucchinis on the way. 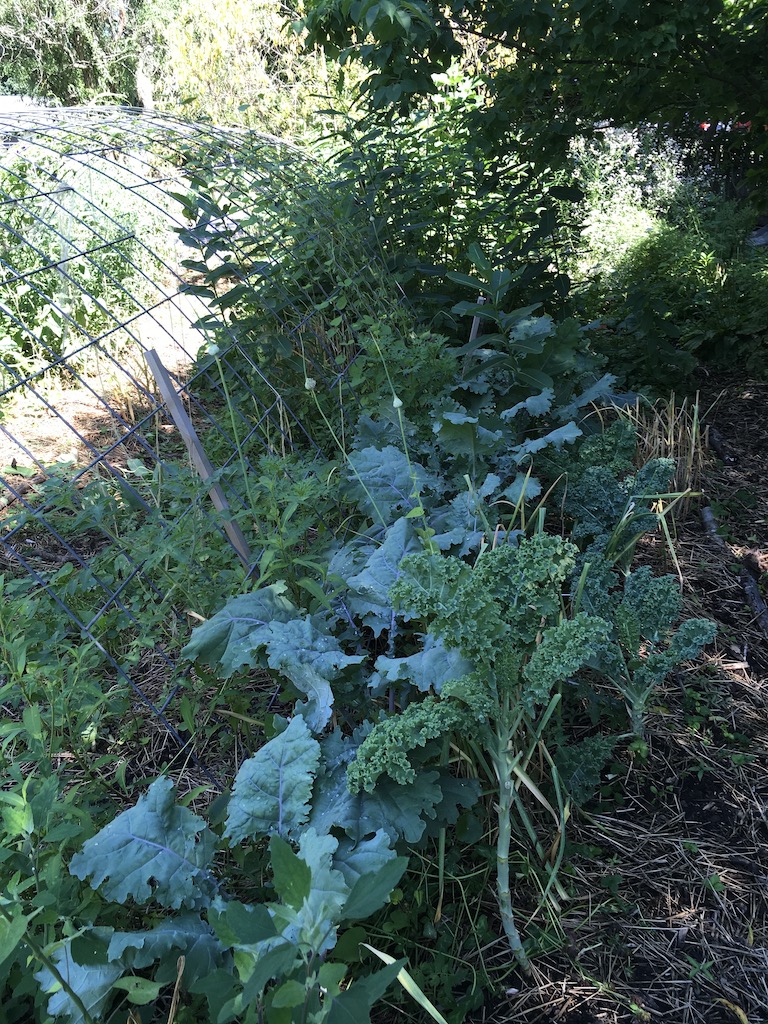 Right now and for past few weeks, and on and on, even into next year — huge surplus of kale. I’ve been freezing some and Marita takes some to Mother Hubbard’s Cupboard. 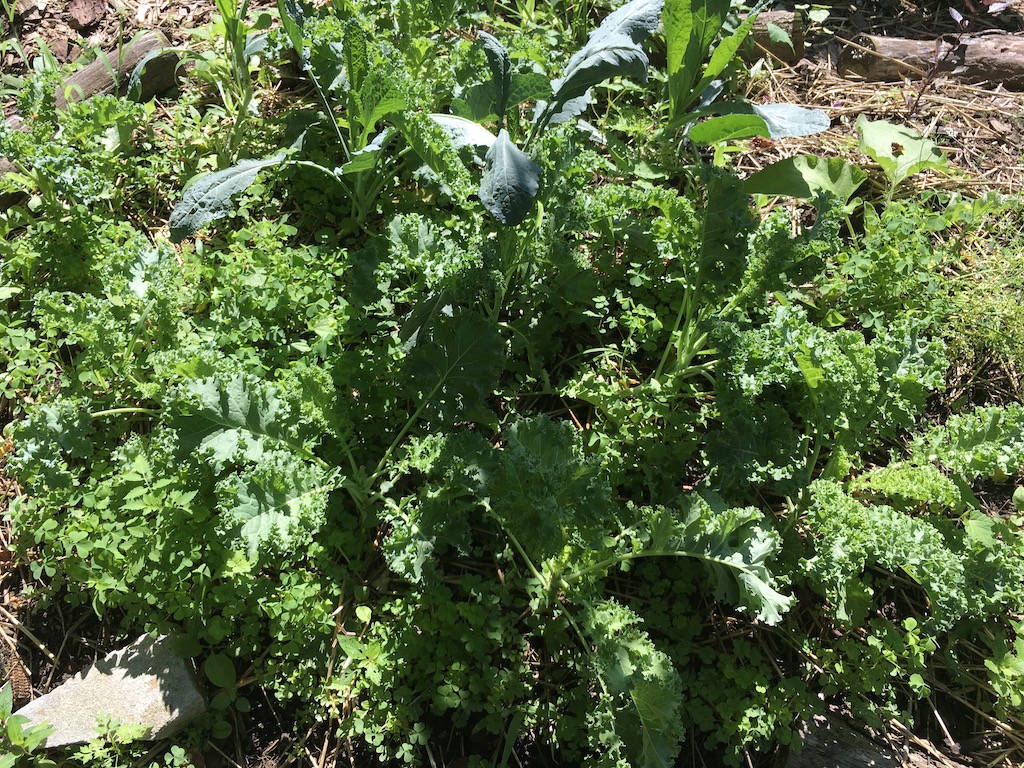 Finally, you might be moved to read this book: SACRED ECONOMICS: Money, Gift, and Society in an Age of Transition (2011), by Charles Eisenstein. ‘Cuz we’re there. The transition has arrived. There’s no going back. And the future will be created from grounding the visions of what the majority of humans fearlessly, and relentlessly, dare to intend.